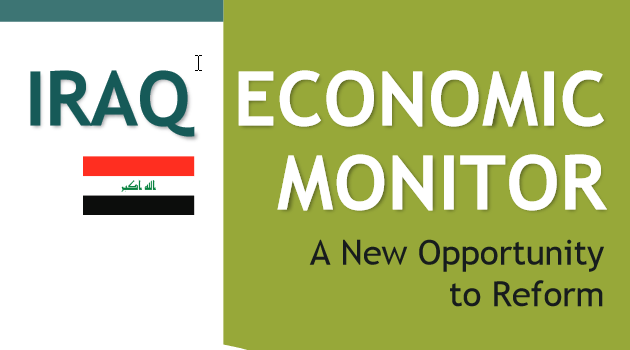 From the World Bank:

After growing by 2.8 percent in 2021, GDP growth accelerate in the first half of 2022 to 10.5 percent thanks to rising oil output and a recovery in domestic economic activity after the pandemic. Record oil exports have brought in record oil revenues for the government and pushed international reserves to their highest levels in more than two decades.

However, global inflation has partly passed through to consumers, negatively impacting consumption of the lower income deciles, and added to import costs and food security risks. While the Emergency Food Security and Development bill, provided some space for urgent expenditures in the absence of a ratified budget for 2022, investment projects and implementation of economic reforms were impacted by the delays in government formation.

Without deeper structural reforms and economic diversification, Iraq's extreme oil-dependence leaves it vulnerable to commodity price volatility. Despite several reform initiatives, Iraq remains one of the most oil-dependent countries in the world. High dependence on oil, procyclical fiscal policy and insufficient oil revenue management have left Iraq vulnerable to commodity price volatility. The private sector, mostly dominated by the poor and vulnerable segments of the workforce, remains largely informal and stunted.

Looking ahead, Iraq's economic outlook will be supported by persistent high oil prices, but global demand is expected to gradually weaken. GDP growth is forecast to accelerate to 8.7 percent in 2022 driven by strong oil GDP growth of 12 percent and stronger non-oil growth supported by non-oil industry and services activity. Growth is expected to gradually ease over the medium-term as oil production will be constrained by more sluggish global demand. With oil prices projected at over US$90 per barrel in 2022-24, strong oil export revenues are expected to keep fiscal and external accounts in significant surpluses.

Downside risks to the economic outlook relate to further weakening of global demand, insecurity and political instability, and renewed inflationary pressures. Rising food prices exacerbate pre-existing poverty trends and increase food security risks. Risks of social unrest would be compounded by any further erosion of purchasing power due to inflation, and continued electricity and water shortages.

Iraq's socio-economic vulnerabilities are further be amplified by intensifying climate change shocks both in physical (temperature rise, water scarcity, extreme events) and financial terms. Iraq's dependence on oil also leaves it vulnerable to new economic risks amid the global transition towards a decarbonized world that would gradually diminish oil's prominent role in fueling the global economy. The focus of mitigation measures should therefore be on bridging the supply-demand gaps while decarbonizing Iraq's energy value chain and managing the macro-fiscal implications of the transition to a low-carbon economy.

A new government was confirmed into office in October 2022, marking a new opportunity to implement reforms towards economic diversification, tackling longstanding structural challenges and addressing climate challenges. Crucially, Iraq's intertwined development and climate realities require an urgent call for adaptation and mitigation actions that can bring growth and productivity gains, accompanied by fiscal reforms and economic diversification that make these measures feasible and sustainable.