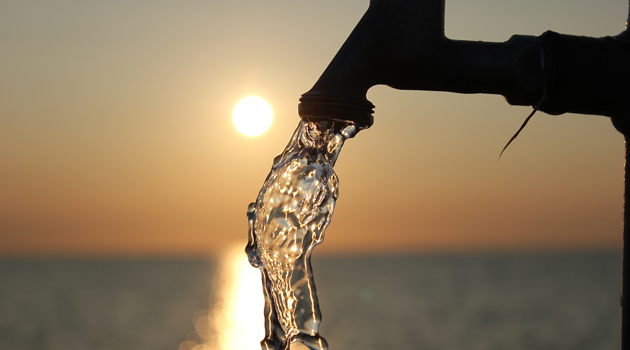 UNICEF and the German Embassy handed over a water project funded by Germany, to the Governorate of Al Najaf.

This project will secure safe and clean drinking water benefitting more than 250,000 people in south Al Najaf and Al Kufa.

The project, financed through KfW Development Bank, was initiated to ensure access to safe water for a community suffering from highly contaminated water.

Implemented in two phases, where piles were installed inside the Euphrates river basin enabling water intake to be extended by 15 meters, followed by pipe extensions and submersible pumps and electrical fixations the project was completed by the end of July this year. As a result, 6,000 m3 of clean water is pumped per hour securing safe and clean drinking water for these communities.

Ensuring access to safe water is key in the fight against climate change. With rising temperatures, children and young people are at higher risk of more frequent, more severe climate hazards than ever before. They are most vulnerable physically and psychologically, putting them at increased risks of morbidity and mortality.  Almost every child is already exposed to water scarcity, heat waves, and vector-borne diseases.

"Supporting the water sector in all aspects, including access to clean and safe drinking water, will be key in mitigating the effects of climate change," said Philip Holzapfel, German Chargé d'affaires a.i. in Iraq.  "This is why Germany supports the efforts of the Iraqi Government and the Governorate of Al-Najaf to provide basic water services to the local population. In particular, I am delighted that this project will be setting a strong priority on strengthening the access to WASH services for children and young people. It is their future that is at stake."

In Iraq, only 59.7 percent of the total population has access to safely managed drinking water, dropping to 47.6 percent in rural areas2. Extreme weather conditions, drought, and changes in water recharge patterns are making it more difficult to access safe drinking water, especially for the most vulnerable children.

"The climate crisis is a child rights crisis.  Children are the least responsible for climate change, yet they will bear the greatest burden of its impact," said Sheema SenGupta, Representative, UNICEF in Iraq.  "Thanks to the generous support of Germany, through this project we can reap the immediate and long-term benefits of safe drinking water, including protection of Al Najaf children from water-borne diseases, enhancing higher school attendance, and young people's greater productivity at work."

Vulnerable families are more exposed to climate-related challenges. Without action now, inequalities that children and young people are facing will be further exacerbated by climate change.  UNICEF will continue to support the Government of Iraq, in coordination with other UN agencies and partners, to collectively address the challenges of environmental sustainability, and work with children and young people as agents of change, on the value of water and water conservation.

UNICEF Iraq gets $26m from Germany for COVID Response