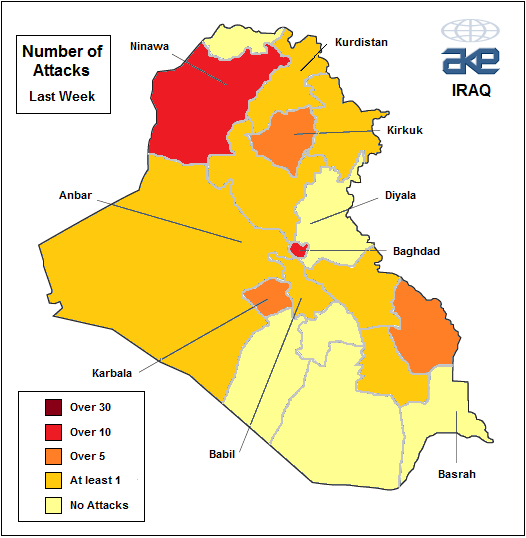 By JohnDrake on 20th July 2011 in Weekly Security Update

Levels of violence fell slightly in Iraq last week, but there were still over 60 separate incidents recorded. Given a slight decline in the number of attacks recorded since July AKE has lowered the security risk rating for the country on Global IntAKE. Violence remains concentrated in Baghdad, Mosul and Kirkuk although attacks were scattered throughout the central provinces last week and as warned, the holy event of Sha’abaniyah saw a number of terrorist attacks targeting pilgrims around the city of Karbala. The south of the country and Kurdistan in the north remained relatively quiet but they have not been without incidents of note from a security perspective.

As usual, violence in the north remained concentrated in the cities of Mosul and Kirkuk, where bombings and shootings are a daily occurrence. Conditions in neighbouring Kurdistan are far more quiet, although recent days have seen Iranian troops clashing with separatist rebels on the border of Sulaymaniyah province. This does not pose a major risk to business interests in the region and cross-border raids by both Ankara and Tehran have been a frequent occurrence over recent years. Most economic activities will remain unaffected and the level of risk will remain restricted to very sparsely populated and largely inaccessible parts of the Qandil Mountains.

As warned in last week’s security update, terrorists targeted religious travellers heading to Karbala to commemorate Sha’abaniyah. A number of people were killed and injured in explosive attacks around the holy city, although the death toll would have been higher had the authorities not increased their security measures, arresting several suspected militants and defusing a number of additional explosive devices. With the security forces being particularly vigilant during their checkpoint searches there was an overall decline in violence throughout the central region, with Baghdad seeing very few attacks. One issue of concern, however, is that militants based in the south-east of the city continue to target the International/Green Zone with rockets and mortars. Other districts remain largely unaffected and foreign companies intent on doing business in the city should consider the possibility of staying in the unfairly termed ‘Red Zone’ if they wish to minimise the risk of being caught up in an indirect fire attack.

The southern provinces remain comparatively quiet but they are not without their operational concerns. Butayrah air base near Amarah has been hit with indirect fire on a regular basis over recent weeks and US forces are now responding by conducting operations and air strikes around the area. Similar US raids in the southern region have prompted sporadic protests around provincial government buildings in recent weeks, while militants have increased their targeting of American soldiers at the same time. Personnel should therefore be prepared for ongoing rocket attacks against fortified facilities, roadside bombings against US military patrols and potentially disruptive and possibly xenophobic demonstrations in city centre locations although the majority of logistics movements will be able to continue largely unaffected.