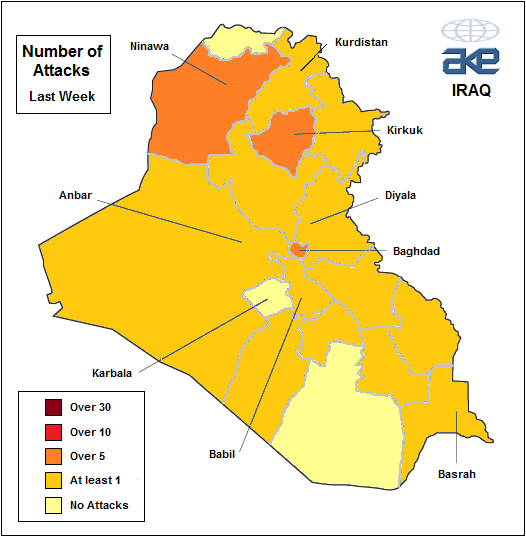 By JohnDrake on 28th July 2011 in Construction & Engineering In Iraq

There was a reduction in overall levels of violence in Iraq last week, making it the quietest week in the country since February. Baghdad actually had the quietest week so far in 2011, which is promising, except that the authorities have warned that the lull is likely to be temporary. It may be the case that militant groups are consolidating their resources ahead of a renewal of violence over the coming weeks, although the onset of Ramadan around 31 July is likely to alter ongoing trends in the country. Conditions remained hostile in the northern cities of Kirkuk and Mosul, while the south of the country has seen a slight uptick in attacks last week. These predominantly targeted the US military, although a senior Shi’ah religious figure was also targeted in a shooting attack.

Iranian troops continue to shell isolated parts of the Qandil mountains in an attempt to target Kurdish separatist rebels in the area. Military operations against Kurdish rebels are likely more intense at present because both sides will want to gain ground ahead of Ramadan. The holy month often sees separatist groups such as the PKK offer an amnesty, so fighting may reduce once again from 1 August. Otherwise the wider Kurdistan region remains largely stable. The military operations are having a minimal impact on the majority of travel and business activity in the area.

The centre of Iraq was comparatively quiet last week, although Babil province has seen a slight rise in violence over the past month and security measures were increased in Diyala province amid an increase in bomb attacks (and attempted attacks) in the area. Baghdad had its quietest week this year, although instead of taking credit the authorities have warned that militants are simply preparing themselves for another set of attacks, perhaps over the coming weeks, or more likely after the holy month of Ramadan.

The south of the country has seen a higher than normal number of incidents over recent weeks, posing a concern for the many businesses looking to establish a presence in the oil-rich region. However, most of the attacks have targeted the US military rather than civilian or commercial interests. Militants are likely keen on pressuring Washington into abiding by the current Status Of Forces Agreement withdrawal deadline of 31 December 2011. However, a senior religious figure was also targeted in a shooting attack in Zubayr on 22 July. He survived the attack but the incident highlights the fact that political movements in the south are far from homogenous and that there is still the risk of political divisions evolving into violent confrontation in the coming months.