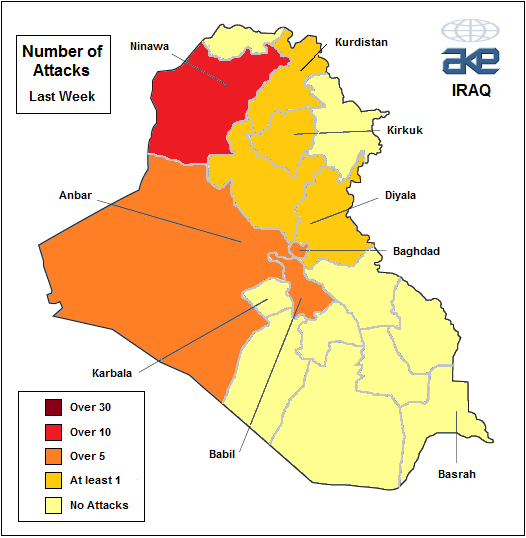 By JohnDrake on 22nd September 2011 in Weekly Security Update

Levels of violence rose in Iraq over the past week. Conditions are still quieter than July and June but they have been gradually worsening over the course of September. Last week saw a series of brutal attacks, mainly in the central region, affecting Baghdad and the provinces of Anbar and Babil. Mosul in the north of the country also experienced a series of bombings and shootings. Two kidnap incidents have also been reported in the country over the past 24 hours, following a lull in abductions recorded since the middle of August. AKE's quarterly kidnap brief will be issued at the beginning of October. If you would like to sign up to receive a copy please enter your details here.

North
Shelling of the border areas by the Turkish and Iranian military continues in Kurdistan, with at least one civilian injured during operations last week. However, much of the region continues to function largely unaffected and Kurdistan should still be regarded as a stable investment climate. The neighbouring province of Ta'mim which holds the frequently hostile city of Kirkuk was relatively quiet. Instead, the more populous city of Mosul in nearby Ninawa province experienced the lion's share of the region's hostilities.

Centre
A rise in the number of suicide attacks in the centre of the country has stoked concerns that radical Islamists are regrouping and increasing their efforts against civilians and the Iraqi security forces. A warning was issued by al-Qaeda in Iraq during Ramadan that it was ready to initiate many suicide bombings and the latest spree would indicate that it is making good on its promise.  The country has seen an average of one suicide attack per week in 2011, with at least 500 people killed and hundreds more injured by the tactic this year.

As previously outlined in Iraq Business News, gunmen attacked a minibus travelling from the predominantly Shi’ah city of Karbala to a Shi’ah shrine in Syria on 12 September. It was carrying a group of Shi’ah pilgrims when it was stopped, close to the junction town of Nukhayb in the sparsely populated but predominantly Sunni district of Rutbah. At least 22 of the male passengers were led away and then shot dead. Security measures have been heightened in the central provinces in the aftermath of the attack but the implemented procedures are not exhaustive and further attacks should be expected.

Shi'ah religious worshippers may be targeted over the coming days as many will be commemorating the anniversary of the death of Imam Sadiq, a revered holy figure. As previously reported, religious pilgrimages remain an attractive target for terrorists. The date falls on 25 Shawwal (23 September) and could see a rise in attacks on civilians gathered around mosques or travelling to shrines such as Karbala or Najaf. As well as the Nukhayb killings there has been at least one attack believed to have been targeting Shi'ah pilgrims over the past week. Caution is therefore recommended.