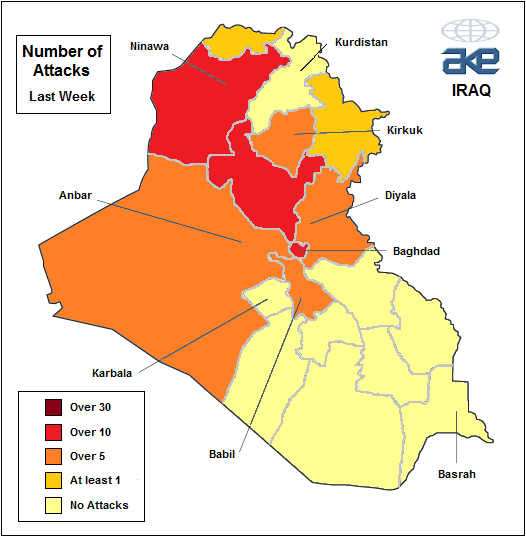 By JohnDrake on 7th December 2011 in Weekly Security Update

As the US military withdrawal continues, many are worried at the possibility of increased militancy over the coming year in Iraq. Levels of violence rose over the past week with the highest number of casualties recorded in six months. As warned, terrorists targeted Shi’ah worshippers gathering to commemorate Ashura, with a number of attacks in Baghdad and the central provinces. However, the authorities reported no violent incidents in the revered city of Karbala where many of the worshippers were actually travelling to which is grounds for some optimism over the capability of the Iraqi security forces. Meanwhile, unrest in Kurdistan over the weekend illustrates that even in the quiet north there remains the potential for political violence.

North
Mob violence left several properties damaged in the town of Zakhu in Dahuk province on 2 December. Shortly after Friday prayers a crowd of young men roused by a particularly inflammatory sermon, began attacking properties associated with the sale of alcohol. These included several Christian and Yazidi-owned shops and at least two hotels. Dahuk has consistently been amongst the quietest provinces in Iraq since 2003 but the incident highlights the fact that even here care should be exercised. Close attention should be paid to localised developments while hotels are advised to review their security measures. Otherwise, the Kurdish region remains stable and the majority of commercial and industrial interests will be unaffected by the latest unrest. Organisations should simply be mindful of current cultural sensitivities while personnel should consider exercising discretion if consuming alcohol. 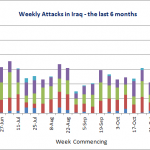 Centre
Unlike several other parts of the country levels of violence fell in Baghdad over the past week with security heightened for Ashura. Nonetheless, a number of attacks marked the date, demonstrating that terrorists still have the ability to operate in the city and conduct attacks even for events the security forces have been specifically preparing for. Foreign nationals have also been alarmed by last week’s bombing in the International/Green Zone while the US state department has altered its advice on travel to the country with many now concerned that the risk of kidnap has increased. With almost 80 people abducted in the country so far this year Iraq should still be considered a kidnap hotspot. Personnel should exercise caution and bear in mind that even the fortified IZ is not completely ‘safe’.

South
There were no major incidents of violence recorded in the south of Iraq last week although the security forces continue to conduct counter-insurgency operations throughout the region. The police in Basrah in particular remain on alert following the bomb attack in the city centre prior to last week’s oil and gas conference. The province currently sees an average of around one major attack per month so conditions are still far more quiet than in the centre of the country.