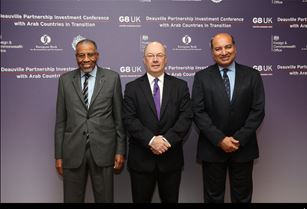 By Madeleine on 18th September 2013 in Iraq Education and Training News, Madeleine White

It’s nearly a year since I wrote my first blog. Having spent time at the World Bank in Washington and linking that to the great experiences I had had when I visited Kurdistan I felt compelled to write about what I referred to as Infinite Possibility and Immediate Need. It’s funny how in life a personal journey often mirrors a corporate one.

As such this blog will be focussing on some key points discussed in Monday’s G8 Deauville partnership investment conference for Arab countries in Transition however, bringing a bit more of a personal perspective  by linking my own ‘micro’ risk and reward story -  to Sir Suma Chakrabati’s ‘macro’ perspective of “ how to translate desire for change into a practical solution” .

The core premise is this. Depending on who you listen to between 46 and 70 million jobs need to be created across the MENA region between now and 2020 (that translates into about 5 million in Iraq). At the start of 2010 Iraq had the highest rates of youth unemployment in the Middle East, thanks to intervention from a number of sources, it is now hovering at around 23%.

In order to reduce this figure, economic growth needs to be at around 6% . In order to make that happen, Iraq needs further significant inward investment with large scale capital corporate investors needing a sense security - social, political and economic.

However, in order to create a sufficiently ‘welcoming’ sense of security, macroeconomic stability is required. Now, this is the nub of it (and was discussed in detail on Monday) – this kind of stability requires a stable political landscape, a thriving internal private sector and a people that are sufficiently engaged in the political and economic process.  If this is the case, policy makers agreed that policies implemented would unite a population in a way that would drive economic empowerment on an individual as well as a national level.

A stable frame-work and an empowered people, linked to a strong civil society would allow individuals, MSME’s and communities to take risks. 'How to create a frame-work that is able to successfully harmonise national environments and global perspectives', was a theme some of the world’s leading economists returned to again and again.