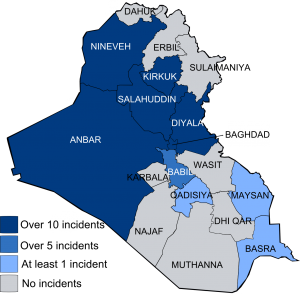 Initial election results released by the Independent High Electoral Commission on May 19 showed that Prime Minister Nouri Al-Maliki’s State of Law coalition won the largest share of seats, with at least 94 elected MPs in the 328-member parliament. Though previous estimates predicted that Maliki’s party would lead the polls, proportions exceeded expectations as the Sadrist bloc and the Islamic Supreme Council of Iraq (ISCI), his two main Shia rivals, only picked up 28 and 29 seats. Kurdish lists gained a total of 62 seats, while the two main Sunni coalitions won at least 33 seats. The secular coalition headed by Iyad Allawi took 21 seats, reflecting the limited appetite for cross-sectarian platforms, a stark contrast to the 2010 parliamentary elections. While Iraq enters a difficult negotiation phase in which Maliki’s rivals will form alliances and attempt to extract concessions, increased tensions translated into a series of deadly incidents against civilians, with a noticeable return of VBIED sequences to the capital. The challenge of forming the next government will not only be solved with the co-optation of parties through government positions, but will also depend on the ability of leading blocs to reach some degree of consensus on divisive issues. The task of reaching out to rivals will be particularly difficult for Maliki, who has not only antagonised Sunnis and Kurds, but also Shia parties which oppose policies seen as sectarian and fuelling conflict. Although southern provinces continued to be insulated from major attacks, divisions between Shia parties grew in parallel with intra-Shia violence, which has witnessed an uptick in the past weeks. These initial election results are unlikely to satisfy Maliki’s rivals, and most coalitions are expected to appeal the results before the judiciary over the next weeks. These procedures will further hinder the political process, with government formation likely to take at least six months and translate into increased tension and violence.

The frequency and intensity of attacks reported across northern governorates remained consistent with previous weekly averages, with main incidents concentrated in Nineveh and Salahuddin. On 13 May, a VBIED explosion caused 13 casualties in Salahuddin. On 14 and 15 May, two car bombs detonated in the multi-ethnic province of Kirkuk, which witnessed competitive elections between various Kurdish and Arab lists. Series of IEDs and small arms attacks continued to mirror the worsening security situation in northern governorates, with claims of electoral frauds likely to fuel discontent and energise ISIS militants. Though Kurdistan remained free from major incidents, the position of Kurdish leaders will be determinant with regard to government formation. The preliminary results achieved by the Kurdish lists, which won more than 60 seats, are indeed likely to give leverage to Erbil in the post-election negotiations, with oil and budget disagreements with Baghdad expected to draw closer to consensus in the next months. Meanwhile, current levels of violence are likely to be maintained in all northern provinces, as government resources will continue to be absorbed by the electoral process. 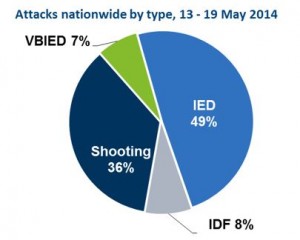 In line with the trend identified last week, the number of VBIED incidents witnessed in Baghdad continued to increase over the reporting period. On 13 May, a series of car bombs hit the capital and killed at least 28 people. Two car bombs initially detonated in the neighbourhood of Sadr City, while a third one exploded in a commercial street of Jamila district, eastern Baghdad. A fourth VBIED subsequently detonated in the same area, killed four people. Electoral tensions were also mirrored in incidents targeting political figures. On May 18, a Shia politician was reportedly kidnapped by militants. In a bid to further destabilise the government, ISIL militants seem committed to concentrating the majority of their resources on the capital, which has been facilitated by the security vacuum prevailing in neighbouring Anbar. The majority of ISF operations continued to focus on Ramadi and Fallujah, which the government has been attempting to recapture for five months. On 14 May, three policemen were injured in the district of Hit, when a VBIED exploded near a police station. While the electoral campaign largely focused on the Anbar crisis and its perceived mishandling, any drastic movement on the issue is unlikely over the next weeks. In light of current political and security dynamics, violence across central governorates will remain elevated.

Divisions between the main Shia factions were reflected in an increase in tribal fighting across southern provinces, with tensions expected to increase in the next weeks. Despite an absence of car bombs which continues to demonstrate that ISIL militants remain focused on Sunni-dominated areas of the country, intra-Shia violence translated into drive-by shootings targeting individuals in the provinces of Basra, Maysan and Qadisiya. Despite this change of dynamics, most incidents remained concentrated in Babil governorates, with series of IEDs hitting ISF checkpoints. Preliminary election results, which gave a large advantage to Maliki’s coalition, are likely to inflame existing tensions, with incident levels expected to rise across south-eastern provinces. 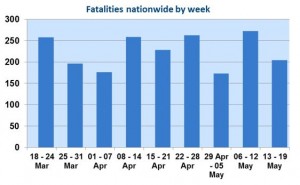