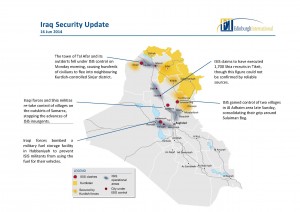 The multi-ethnic and religiously-mixed town of Tal Afar, mostly populated with Sunni Turkmen, reportedly fell to ISIS insurgents early on Monday and is now being hit by Iraqi airstrikes. This development is neither surprising nor significant, as the majority of ISF ground troops have either fled, been captured or have found refuge in Kurdish-controlled districts of Nineveh. The ISIS takeover follows a refusal by Tal Afar leaders to allow Peshmerga forces to move into the city, from the Kurdish-controlled, neighbouring, disputed district of Sinjar. The capture of Tal Afar, a small town located 60 km west of Mosul and surrounded by rural areas, does not constitute a major breakthrough for ISIS forces seeking to push towards Baghdad.

The fall of Mosul and the lighting Sunni offensive advancing towards Baghdad from the North are currently determining the strategic movements of Iraqi troops, shifting their attention away from the Anbar frontline. This spectacular advance seems to have energised militant cells established in the West, with some attacks reported on targets close to the capital. On 11 June, five rockets hit Baghdad International Airport. Further IDF on BIAP has been reported in the last 24 hours. However, the increased motivation and mobility of ISIS troops within Anbar will not overcome the main challenges insurgents face in Fallujah and Ramadi, posed by Sunni tribal coalitions staunchly opposed to a permanent ISIS takeover in Anbar, despite sharing some of their grievances towards Maliki’s government. ISF counter-insurgency strategy has so far mainly consisted of shelling, curfews and reinforcement of checkpoints on roads towards western Baghdad. The northern offensive will have little to no impact on these actions and the situation is therefore expected to stagnate, with a western push towards the capital coordinated with the northern offensive unlikely. Instead, ISIS gains within Anbar are a stronger possibility, with militants advancing towards Haditha and Hit in western Anbar, and Habbaniya between Fallujah and Ramadi.

Sporadic violence continued through the last 24 hours in the Diyala River valley although reports of continued ISIS advances are overplayed. Sunni militants, some of them ISIS cells, have failed to capitalise on the coordinated assaults of the last week and the town of Sulaiman Beg, north of Khalis towards Tuz Khurmatu remains the only significant settlement close to Diyala where militants have control. The Diyala Operations Command has identified that Sulaiman Beg will be the focus of a significant ISF operation in the coming week. The last 24 hours has seen ISIS claiming advances into Diyala around Al Adhaim suggesting an attempt to consolidate on their control of Sulaiman Beg. The seizure of these villages represent the only territorial gains in Diyala Province and do not threaten the major towns on the Diyala River. Following the ISF advance to re-take Muqdadiyah and Kurdish Peshmerga operations to secure Jalawla and Saadiyah, ISIS cells and other Sunni militants in the Diyala River Valley will continue to clash with these forces mainly on the outskirts of towns while established cells conduct bombings within them.  ISF air and aviation operation continue to represent the greatest threat to Kurdish forces protecting towns with Kurdish communities such as Khanaqin and Jalawla. ISF air strikes and aviation assaults have killed and injured a number of Peshmerga fighters in the last 72 hours.

As of 16 June, the main frontline between ISIS and ISF remained focused on Salahuddin province, north of Baghdad. After days of advances between 10-12 June which included the capture of Mosul, Tikrit and areas in the outskirts of Samarra, the ISIS push stalled near Samarra, where Iraqi troops regrouped and appear to be organising a counter-offensive to regain control of the north. The mobilisation of Shia militias helped contain the Sunni offensive, with the towns of al-Mutaim and Ishaqi, south-east of Samarra, retaken by the Iraqi army on 14 June. While unconfirmed, ISIS militants claimed to have executed 1700 Shia recruits in Tikrit, though this figure is most certainly exaggerated.