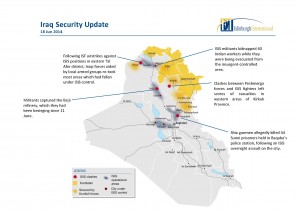 The situation remains extremely fluid and reporting largely disrupted across the North. Iraqi forces backed by local police and Turkmen groups recaptured ISIS positions in the district of Tal Afar, which fell under ISIS control on Monday. These gains followed ISF airstrikes on eastern neighbourhoods of Tal Afar, which caused a number of militants to retreat from the area. Routes into Sinjar and towards Kurdistan are still under the protection of Kurdish Peshmerga forces who are conducting vehicle checks to prevent infiltration and suicide attacks.

After clashes between Peshmerga soldiers and ISIS erupted in the village of Bashir, 34km south of Kirkuk, Sunni militants are now reportedly in control of the area. The fighting left at least three Peshmerga dead, and Kurdish forces were reportedly sending troops and vehicles to regain control of the town on Wednesday. This incident follows an ISIS statement offering a truce to Kurdish soldiers, who are also battling with ISIS in some disputed areas of Diyala. According to Kurdish sources, fighting is still ongoing in Hawija, Zab, Abasiya and Rashad districts of Kirkuk.

Militant activity continued to be recorded between Baquba and Khanaqin, including in Kurdish-controlled areas such as the small city of Jalawla north to Muqdadiyah. Militants have been moving in and out of towns to disturb the organisation and allocation of Peshmerga forces across the province in order to seize unprotected areas.

After the intense fighting on the outskirts of Samarra which saw the ISF reclaiming several positions between 11 – 16 June, ISIS has temporarily alleviated its pressure on the area to shift their focus on Baquba, the capital city of Diyala located only 50km to the northeast of Baghdad. As of latest reports, Baquba is still under ISF control, with ISIS briefly holding areas of Baquba on Tuesday night before being repelled by Iraqi soldiers and Shia militias. After a police station where dozens of Sunni prisoners were being held on terrorism charges came under ISIS attack, Shia gunmen (which some reports state were policemen) allegedly executed 44 of them.

Despite the apparent tactical shift towards Baquba, the insurgency continues to be split across several fronts, with the northern part of Salahuddin still largely under ISIS control. Three more villages, Albu Hassan, Birwajli and Bastamli have reportedly been seized by ISIS after deadly clashes left 20 civilians dead. The situation is extremely fluid between Baiji and Samarra, with accounts of ISF troops leaving their remaining positions in the vicinity of Baiji to join up with soldiers stationed in Samarra. This movement follows an attack on the Baiji refinery late Tuesday with machine-gun fire and mortars, with fighting ongoing on the site throughout 18 June.

Militants now appear to control three-quarters of the facility, including the production units. The refinery was shut down on Tuesday and foreign staff evacuated. The Baiji refinery produces about 170,000 barrels a day and supplies northern Iraq. If permanent, its capture will certainly affect power supplies in the region, which may drive the ISF back to the northern front potentially re-tasking units currently operating in Diyala.  Further south, skirmishes between ISF and ISIS were reported between Tikrit and Samarra, with militants setting several deserted ISF checkpoints on fire.