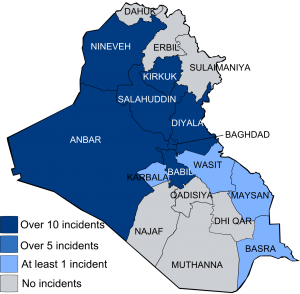 A spectacular ISIS offensive launched on 10 June across the North forced the ISF to retreat and regroup into the southern districts of Salahuddin. Most of Nineveh, including its capital Mosul, and the northern section of Salahuddin, encompassing Tikrit, are now under insurgent control. The number of reported fatalities, recorded at 387, while much higher than standard weekly averages, likely does not include a significant number of unrecorded fatalities and reflects the interruption of reporting in areas seized by ISIS. The Sunni offensive is likely to revive some elements of the sectarian strife. The mobilisation of Shia militias, following cleric Ali al-Sistani’s call to take up arms and precipitated by the advance of Sunni militants into areas surrounding the holy city of Samarra, north of Baghdad, helped retreating armed forces break the ISIS momentum. Though ISIS leaders continued to claim the capture of territories in Nineveh such as the small town of Tal Afar on 16 June, these gains are largely insignificant, with the most concerning fighting areas located between Tikrit and Samarra, and to a lesser extent in territories surrounding Baqubah in Diyala.

While unexpected due to the unforeseeable extent of the military collapse in the North, this surge in violence follows months of political stagnation and deteriorating security situations in Iraq’s northern and central governorates. Although this offensive is a clear demonstration of the strength of ISIS and the weakness of the Iraqi Army, the swift capture of entire cities has largely been allowed by the ambivalence of Sunni populations and the assistance of local Sunni militant groups, former Baathists and Sunni tribal militias, who perceive PM Maliki’s policies as sectarian and see ISIS as a lesser threat to their interests. Despite this rampant offensive initially appearing to threaten the capital, accounts of unstoppable ISIS fighters marching on Baghdad from multiple fronts are largely overplayed. The push from Nineveh undoubtedly energised militant cells established in Anbar and Diyala, but the fall of Baghdad remains an unlikely outcome at this stage, with security around the capital reinforced by the re-deployment of forces from the South, the mobilisation of Shia tribes and reorganisation of ISF troops from northern divisions.

Following the insurgent offensive in Nineveh, Salahuddin, and some areas of Diyala, reporting was almost completely disrupted in regions falling under ISIS control. Accounts of atrocities displayed on videos cannot be backed with reliable sources, such as the alleged massacre of 1,700 Shia recruits in Tikrit. While ISIS has been able to consolidate their positions around Mosul and Tikrit, their advance appears stalled in Samarra. Territorial gains in Diyala were also short-lived, with towns surrounding Muqdadiya rapidly re-taken by ISF soldiers and Shia militias on 13 June. The ISF retreat allowed Kurdish forces to swiftly move into disputed areas of the North and take full control of Sinjar district in Nineveh, Kurdish-majority territories of Diyala and most importantly the oil-rich city of Kirkuk, which the Kurds see as their cultural capital. This Kurdish advance, which the Iraqi Government currently depends on to contain the insurgency in the North, will undoubtedly give considerable leverage against Baghdad in their negotiations towards an oil and budget deal. The next days are likely to see large ISF deployments attempting to consolidate the northern frontline in Samarra and push towards ISIS-controlled territories. Levels of violence in Diyala will remain relatively elevated due to the ongoing presence of ISIS fighters in these areas. 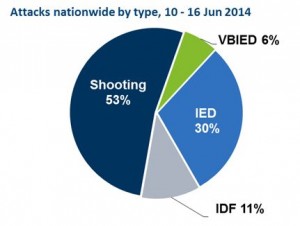 Owing to the re-deployment of ISF forces towards areas closer to Baghdad, ISIS fighters capitalised on their greater mobility within Anbar, particularly in the west of the province where the border town of al-Qaim was briefly captured by ISIS and re-taken by the ISF on 17 June. The northern insurgency seems to have energised local militant cells, reflected in thwarted assaults on the towns of Hit and Haditha on 14 June. In Fallujah and Ramadi, the continued opposition of local Sunni tribes and ISF shelling continued to prevent ISIS from moving beyond these areas towards Baghdad, and the situation is expected to remain stagnant on this front. In the capital, the mobilisation of Shia tribes fuelled violence in several districts, with Sunni extremists targeting Shia volunteers and civilians. On 11 June, a car bomb killed ten civilians and wounded 36 in Kadhimyah district. On 15 June, 22 civilian Shia volunteers were killed and 40 others injured in a suicide attack. The next few days are likely to witness large ISF deployments towards the North, with ISIS militants implanted in the capital taking advantage of the relative vacuum to stage further mass-casualty attacks in Baghdad.

The re-deployment of ISF forces to the North led to a lifting of security measures in the South, creating opportunities for successful mass-casualty assaults on civilians in areas normally insulated from major incidents. Four car bombs were reported on 11 June across the southern provinces of Babil, Wasit, Karbala and Basra, resulting in scores of fatalities. Despite this change of dynamics, ISIS efforts will remain focused on the northern and central governorates and regular mass-casualty incursions remain unlikely. However, this security vacuum is likely to accelerate the re-mobilisation of Shia militias, which may drive sectarian violence and bring Iraq closer to civil conflict and fragmentation. 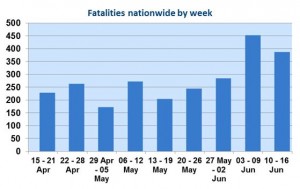