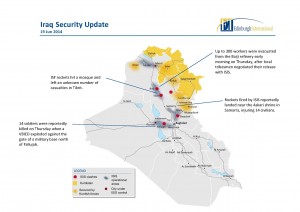 The village of Bashir remained the scene of clashes between Kurdish forces and ISIS fighters, who are still battling over control of the area. The fighting on Wednesday left at least nine policemen and Peshmergas dead, and 28 injured.

The situation remains fluid in Tal Afar, which is still the scene of tribal fighting. The main fighting areas moved beyond Tal Afar however, relieving the district of air strikes on Thursday. The main frontlines now appear to be further south towards Tikrit and Baiji, where ISF operations intensified and attracted ISIS assets.

ISIS have reportedly largely handed over control of Mosul to local tribes and former Baathist officers. Kurdish forces appear to have brokered a truce with ISIS and now control Kurdish areas of the city, which remain peaceful.

Between 250 and 300 workers were allowed to leave after local sheiks brokered a brief truce in fighting at the Baiji refinery. The rest of the 15,800 workers had been evacuated on Tuesday after the government shut down the facility in anticipation of the attack. Accounts differ as to which force holds the refinery, the government claim the ISF is still in control despite TV channels showing an ISIS flag on one refinery building. Military helicopters continued to strike ISIS positions surrounding the refinery on Thursday.

While Tikrit remains under insurgent control, accounts of shootings and explosions were reported by civilians. Iraqi forces continued to shell the city, hitting one of Tikrit’s largest mosques. The number of casualties is unknown. The ISIS takeover has not completely disrupted activity in the city; insurgents reportedly promised hospital workers wages against continued service delivery.

While unconfirmed, rockets reportedly landed near the Askari shrine in Samarra, injuring 14 people. The main frontline remains located about 3km north to Samarra. ISIS have resorted to IDF in an attempt to weaken ISF positions in the city.

Though Iraqi forces successfully repelled the assault launched by militants on Wednesday, ISIS elements remain active in the city. Insurgents reportedly attacked two residences of Peshmerga soldiers in the northeastern area of Baquba without causing any casualties.

Clashes between ISIS militants and tribal fighters are reportedly ongoing in eastern areas of Fallujah, where tensions have been increasing since the offensive launched on 10 June across the North. Two trucks loaded with explosives detonated at the gate of an Iraqi army base on Thursday, killing 14 soldiers.

PM Maliki’s state of emergency failed to garner enough votes in parliament on Thursday, after a boycott by Sunni and Kurdish factions. This law would give extraordinary powers to Maliki, which his political rivals strongly oppose. Iraq’s Prime Minister rejected calls to resign, which the U.S. government and Iraqi Sunni factions see as a necessary action to appease tribal Sunni groups siding with ISIS.