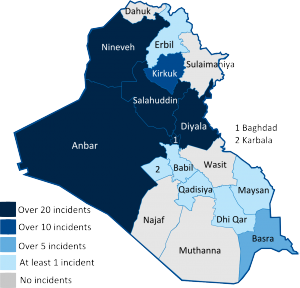 One year on from the start of the militant uprising in Anbar province, Iraq’s fractured regions remain on sharply different political trajectories. In the Sunni heartlands of Ramadi and Fallujah where an initial protest by local tribesmen forced the withdrawal of the Iraqi security forces in December 2014, ISIS units launched a major offensive against urban centres and ISF border posts this week, driving up nationwide fatalities even as the pace of attacks on northern battlefields slowed to a halt on many key fronts. Figures released by the Iraqi government estimating the death of at least 15,000 people in 2014 (an increase of 130% from the previous year), along with hundreds of thousands of refugees also occurred amid the confirmation of yet further growth of the Iraqi oil economy, with production now reaching levels unseen since the 1980s. Embodying these distinct trends has been the province of Kirkuk, which despite witnessing considerable security challenges and refugee influxes over recent months continues to operate a functioning oil economy, resuming international exports this week through the Turkish port of Ceyhan.

Peshmerga-led forces report limited gains in the Makhmour and Qayara areas south-east of Mosul, as the allied advance slows in the central plains. While ISIS units continue to fiercely resist all movement west from Peshmerga-held villages in the disputed territories, no major assaults were organized this week in the northern governorates, most likely in order to support the ongoing Anbar offensive. Instead, the majority of violence took the form of skirmishes and mortar fire on ISF-held frontline cities, including Samarra, Tikrit and Muqdadiya, where sporadic VBIEDs continue to be used regularly as means of undermining and delaying the allied push. While challenging to independently corroborate, a growing number of local reports have also suggested a depletion of manpower and support in ISIS-held areas of Hawijah, Sharqat and Mosul with hundreds of civilians reported to have been abducted over the past seven days as a targeted policy to cow the local population.

ISIS forces press in on Ramadi and coalition training centres in line with a sustained assault on remaining ISF positions in south-central Anbar. At the time of writing, fierce battles are underway to gain control of the Andalus, Hoz and Mostaudah districts of downtown Ramadi, following an offensive launched over the past 24 hours. The energy of the current ISIS advances is likely to have been facilitated by the redirection supplies and heavy armour further south on 04 January, which has enabled the group’s ground forces to surround and besiege key ISF installations in the vicinity of Ramadi, including the Ain Al Assad air base where US military personnel are currently stationed. Control of the Iraqi-Jordanian, and Iraq-Saudi Arabian borders was also tested this week in a series of deadly VBIED complex attacks upon ISF and Saudi military posts. Such attacks have come at the expense of momentum in the northern battlefields of Hit and Haditha, a fact ISF units are expected to exploit over the coming days in renewed clearance operations against the Kubaisa sub-district.

Localised demonstrations in the Qurna area over the reporting period increase the prospect of an escalation in economic unrest against oil and gas facilities, amid unchanged security dynamics in neighbouring governorates. The largest of these disruptions occurred on 04 January when as many as 600 protestors erected tents and closed roads close to the Jabani bridge of north-eastern Basra, demanding jobs and work opportunities from IOCs in the area. News sources have indicated that Royal Dutch Shell, one of the main developers of the Majnoon field were specifically targeted by the demonstrators, due to alleged failure to uphold employment commitments, with protests only ending after local political representatives invited the group’s leaders to discuss job allocations the following day. While no further incidents have occurred, community relations are expected to remain tense in the Qurna area as details of the deal with local government are made public. Less than a year ago, hundreds of protestors blocked a main entrance to the West Qurna-2 oilfield in the area following an employment dispute with Russian IOC Lukoil. 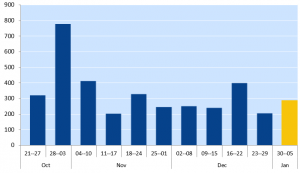