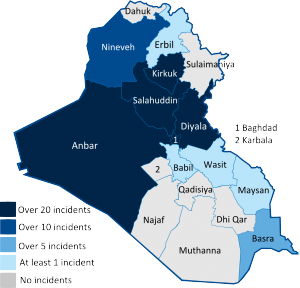 ISIS fighters mount the largest offensive against Kirkuk since July 2014, seizing control of oil and gas facilities as Peshmerga forces defend outer districts of the provincial capital. Preceded by a considerable build-up of militants in the Hawija and Sharqat areas south west of Kirkuk city, the main thrust of the attack occurred on the morning of 30 January when gunmen assaulted Peshmerga positions in the Tal al-Ward area. In the hours that followed, hundreds of people are believed to have fled from the surrounding villages with as many as 15 employees of the northern oil company kidnapped when militants overran the Khabaz oil field only 10 kilometres from Kirkuk city, bringing production to a halt and forcing the authorities to impose a city-wide curfew until the attack was repelled. At present, the precise motivation for the assault remains unclear, although the need to divert Peshmerga forces away from other frontiers is likely to have been a consideration. A week earlier, Kurdish units succeeded in cutting road access to the ISIS stronghold of Mosul, creating a partial blockade which has made the long term prospects of the group increasingly untenable across much of the north-east.

Amid protracted clashes on the outskirts of Kirkuk, ISIS refocused attention to Samarra and other core ISF positions, with car bomb and IED attacks increasing by over 300% in urban areas. Shia and other Popular Mobilization Units (PMUs) remained a major target of such attacks, which now appear to be used increasingly as a means of countering the Iraqi government’s superiority in manpower across much of Diyala and Salahuddin. In one particularly deadly strike on 02 February, seven PMUs were killed and 28 others injured when a small team of ISIS fighters infiltrated the Sur Shnas area of Samarra town, detonating a truck bomb close to a PMU-ISF checkpoint. High profile suicide attacks were also recorded in Kirkuk city on 30 September, though in this instance their use appears to have been coordinated to support the efforts of cells fighting on the edge of the city. Following the recapture of Muqdadiya during the previous reporting period, ethnic and social tensions are also reported to be heightened across much of Salahuddin and Diyala, with further destruction of civilian homes, and inter-communal fighting expected with the arrival of large numbers of PMU volunteers in Tikrit over the coming week.

The battle for control of Ramadi intensifies in the city’s eastern and southern districts as militants increase attacks in districts bordering Baghdad International Airport (BIAP). While no further incidents against civil aviation were recorded, it is important to recognise that ISIS units retain the capability to mount mortar and other indirect fire (IDF) attacks across Abu Ghraib, particularly in the Hamdanya village and the Annaz area where on 30 January up to 12 ISF were killed in heavy machine gun and mortar attacks. From 26 January an operation has also been underway to clear ISIS from the Sjariya area east of Ramadi, resulting in attacks against ISF units more than doubling during this period as all available forces (including for the first time the Shia militias of the Katai’ib Hezbollah) are called in to support the offensive. Approximately 126 militants are believed to have been killed in the course of operations so far, with potentially half as many casualties sustained by pro-government forces in fierce VBIED and suicide belt counter-attacks by the defending ISIS militants. In Baghdad itself, the situation remains unchanged from the previous week, with highest risks extant in the Taji and Tarmiya districts north of the capital, where security personnel continue to intercept car bomb plots and militant raids on a weekly basis.

Underlying risks of small arms fire (SAF) and armed criminality continue to be reported in the Basra area on a daily basis, largely connected to unresolved conflict between competing tribal groups. The single deadliest of these incidents occurred on 29 January when gunmen reported to belong to the Maryah clan opened fire on residential properties in the al-Majidia area, in what is believed to have been a retaliatory attack for the death of a fellow clansmen five weeks earlier. With the potential for further conflict over the coming month, recent areas of fighting including the Abu Sakhir and Intisar areas of Haritha and the Muwafiqiya neighbourhood of Basra should be avoided for all civilian transits. Urban protests, while largely confined to pay disputes among local traders and government employees at present may also see an expansion over the coming week, should authorities fail to satisfy the demands of disaffected groups in Basra city and Dhi Qar. On 02 February, some 70 former oil sector employees were recorded to have gathered in the Rifal area of Dhi Qar demanding a renewal of employment contracts, though in this instance the demonstration ended without any significant disruption. 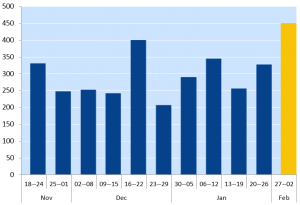