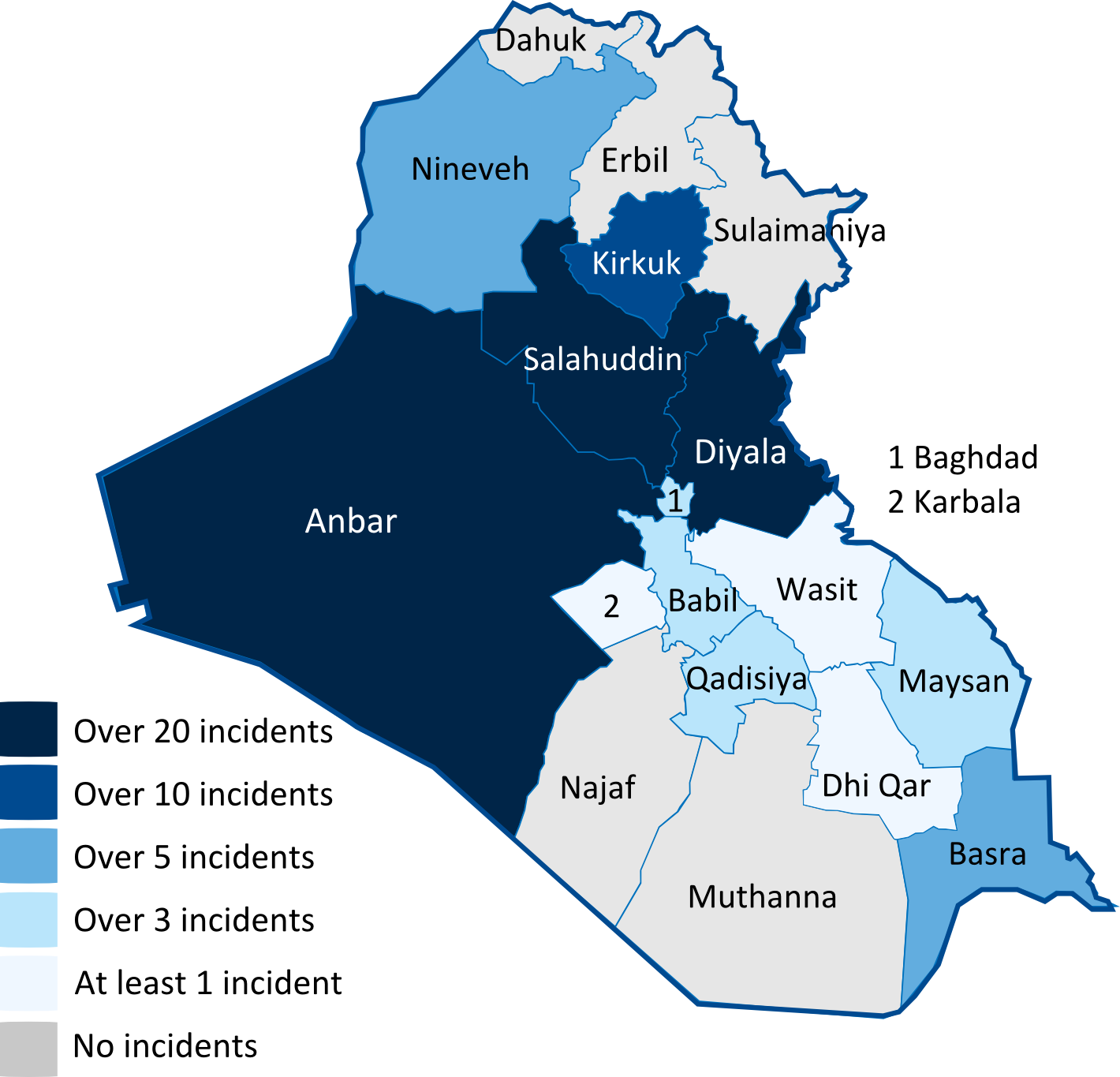 Allied forces are now understood to be in preparations for a direct assault on Tikrit city, following a large scale retreat of ISIS fighters from towns and villages protecting main routes. In total some 20,000 troops, alongside PMU militias and Sunni tribesmen have advanced on the town, closing off routes to the south and east as Kurdish forces directed their own counter-offensive against ISIS fighters near Kirkuk city. At present, fears of large scale reprisals against Sunni communities (as alleged in at least one instance during January’s Diyala campaign) have yet to be realised, although efforts to clear the city itself are likely to prove far more bloody than the fighting so far. Less success was recorded in negotiations between the Federal Authorities and the Kurdistan regional government over the reporting period, with KRG ministries still essentially deprived of agreed budget allocations as a consequence of delay from Baghdad’s finance ministry, adding further pressure to energy sector firms awaiting payment.

Tikrit offensive brings surge in airstrikes, rocket fire and damage to oil fields across central Salahuddin, as Peshmerga launch dual operation to reclaim ISIS-held villages around Kirkuk. While the combined ground forces still remain beyond Tikrit city, fresh momentum was indicated on 09 March when Shia militias and ISF reserves entered the Al Alam suburb on the eastern bank of the Tigris. Hundreds of rockets are believed to have been fired into militant-held areas of the city over the course of the operation with heavy casualties and loss of territory at the village level provoking sabotage against critical infrastructure such as bridges and energy facilities by retreating fighters. On 05 March, ISIS fighters which were surrounded in the Ajil area are understood to have set fire to local wells, a tactic which was repeated during a brief raid on the KRG-held Makhmour district in the days following the attack. Unable to retreat, remaining ISIS fighters are expected to put up a heavy resistance to further incursions in into the city, which will slow the pace of the ISF advance over the coming week.

ISF recapture Baghdadi, press ISIS on Fallujah front line. Insurgent supply channels urban strongholds continued to see heavy targeting by coalition air support over the reporting period, with over ten missile strikes in Al Qaim, Haditha, Hit and Fallujah districts recorded in support ISF ground operations. In a change from previous weeks, Fallujah has re-emerged as a battleground for the Iraqi army’s reformed armoured divisions, although at present, the operations are understood to be primarily concerned with nullifying the missile threat to northern districts of the capital, rather than aggressively recapturing territory as witnessed around Samarra and Tikrit. On 04 March, an ISIS missile facility was destroyed by heavy shelling from the ISF and was followed over the next three days by concerted ground offensives in and around Karma (approximately 12 km west of Abu Ghraib.) While national facilities, including Baghdad International Airport (BIAP) remain secure there is little doubt that such sweeps have yet to effectively end the threat from stray rockets in the Shula and Doura areas of Baghdad, with attacks likely to persist in the absence of a meaningful extension of ISF presence in villages currently held by militant fighters. An example of how such an operation could work was exhibited in Baghdadi, the contested sub-district south of Haditha, which on 06 March witnessed combined ISF and Sunni tribal units successfully expel militants from the district centre after months of heavy fighting.

Tribal conflict stirs small scale clashes in southern governorates, amid limited activity by insurgent or militia groups. In one such confrontation in the Ghammas area of Diwaniyah, three civilians are understood to have died on 06 March when a verbal dispute escalated into an open gunfight. Typically such clashes are not followed by immediate reprisals or outbreaks of major unrest, although grievances can in many cases form the stems of future conflict. An IED attack was also recorded against the home of a government employee in the Ibla area of Basra city on 03 March, causing some material damage, although unlike similar strikes in Babil, and southern Baghdad, local feuds, rather than insurgent involvement is understood to have been the principal motivation. Support for the ISF and the militia-backed offensive in central Iraq remains strong across the majority of southern provinces, with many communities celebrating the involvement of local volunteers and militia recruits in demonstrations over the reporting period.