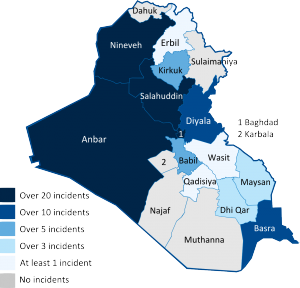 Iraq declares victory in battle for Tikrit city, as PMU and aviation assets turn north for the next stage of the ISIS counter-offensive. Starting with coordinated ground assaults on the city centre from 29 March, the final breakthrough against ISIS in Tikrit occurred two days later on 31 March when security forces stormed the Presidential palaces and governorate buildings close to the Alam Bridge, which ISIS units had been using as an operational command centre. While fighting continued to be recorded up to 03 April around Tikrit University, Tuesday’s assault effectively ended the bulk of ISIS resistance in the city, with Prime Minister Abadi arriving in the town shortly afterwards to announce the victory of the Iraqi forces and calm fears of widespread reprisals and arson by Shia militias reported in the international press. Whatever the extent of the post-victory attacks, since 04 April, all militia forces are now reported to have withdrawn from Tikrit city, with responsibility for security now in the hands of the Iraqi Federal and Local police. Popular Mobilization Units (PMUs) are now understood to be reorganizing along a number of different fronts, including Fallujah, Baiji and Shirqat, all of which are experiencing heightened levels of militant activity amid a wider attempt by allied forces to maintain the momentum of recent victories.

ISIS cells attempt to regain initiative against allied advance with mass-assaults in Baiji and Sinjar town, amid stable conditions in the Kurdistan territories. Having now lost their major stronghold in Iraq’s central territories, less than two months after an abortive attempt to capture Kirkuk, ISIS cells are likely to focus their efforts on strengthening the group’s remaining positions around Hawijah, Baiji and Tal Afar before the anticipated arrival of further allied reinforcements. Such tactics were strikingly demonstrated on 06 April, when after over three weeks of light raids on Mazraa village south of Baiji, militants conducted a major assault in which some 50 gunmen are reported to have been killed. ISF units currently control around half of the town and on this occasion were able to repel the attackers without significant casualties. A large concentration of vehicles and tactical units around Sinjar and Mosul was also detected from 04 April onwards, prompting coalition warplanes to pivot away from Tikrit and back to traditional operations in support of Peshmerga forces close to the Gwer and Tal Afar front lines. Despite ISIS incursions reported in the outlying village of Wardak however, the security environment in Erbil, Sulaimaniyah and Dohuk remained stable for another consecutive week.

Militant cells face renewed pressure from ISF operations in Ramadi, Fallujah districts, as rocket threat to Baghdad remains low for a third consecutive week. With Iraqi and coalition air assets now freed up from the Tikrit offensive, renewed bombardment was recorded across Ramadi town and the ISIS-border station of Al Qaim this week, adding support to the ongoing ground offensive in Zankura and Tameem areas of the Anbar provincial capital. Particularly extensive sweeps appear to have been triggered following an ISIS assault on the Albu Chltb and Tawt areas of Ramadi on 31 March, and while neither side appears to have scored any significant breakthroughs, the situation for ISF and tribal volunteers from within the city remains challenging. More success for the Iraqi army has come from Karma town and the villages east of Fallujah, where daily patrols continue to push back the operational reach of ISIS cells, absorbing the bulk of rocket fire previously directed against the national capital. In Baghdad itself, the primarily challenge to expatriate operations remained the risk of small arms fire and IED attacks, particularly in the restive suburbs of Jihaad Bayaa and Adhamiya where locally inspired violence and criminal activity continue to produce daily reports of targeted killings and reprisals against civilian residents.

Heightened threat of tribal clashes emerges in the Qurna and Faw areas of Basra province, amid low level armed criminality and IED attacks in Babil, Dhi Qar and Maysan. By far the most significant of these disturbances occurred this week on 01 April, when large numbers of armed men of the Albu Shai’a and Albu Hamad tribes clashed in rural Faw (close to the Um Qasr port facility), requiring intervention by the armed forces after almost two consecutive days of fighting. Information available suggests that local issues, including family disputes were the primary motivation for the clash, mirroring similar disturbances in Qurna, Midaina and the Qarmat area of Basra city by Basra’s myriad tribal factions. While official reports indicate that SWAT teams and other security personnel have now left the Faw, area (following a reduction in tensions on 04 April), expatriate personnel are advised to pay close attention to local media while travelling south of Basra city in the event that such hostilities are revived. A relatively new trend of armed criminality, including kidnap for ransom was also identified in Amarah (Maysan) and Abi Gar (Dhi Qar) towns from 31 March onwards, with assailants in the case of the latter reported to have shot dead two Oil Protection Force workers, before robbing the pair of cash and other valuables. Despite suspicion of ISIS involvement in the cases, no militant organizations have claimed responsibility for the attack.