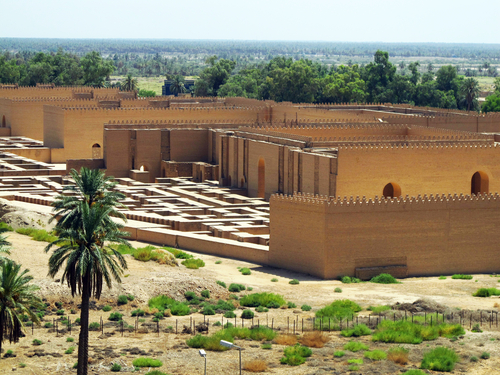 The ruins of the city of Babil, some 56 miles south of Baghdad, flourished as the ancient Mesopotamian capital of Babylon, founded in the 19th century BC.

Since that time, the city has suffered from neglect, and poor treatment of its buildings and the very ground it was built on. There is now talk among Iraqi cultural officials of reviving tourism in the city.

Two events of the modern era greatly contributed to jeopardizing or destroying parts of Babil's ancient heritage. The first involved renovations under former President Saddam Hussein as part of his political-construction program.

In 1988, some of the buildings were renovated in such a way that UNESCO protested on the ground that the changes threatened Babil's historic status. UNESCO removed the city from its World Heritage List that same year.

Jeff Allen, field manager for the Future of Babylon project, told Deutsche Welle on June 21, 2013, that work was underway to reinstate Babil to the UNESCO World Heritage List by removing all the modern renovations made to the city in 1980, such as concrete slabs at the Ishtar Gate.