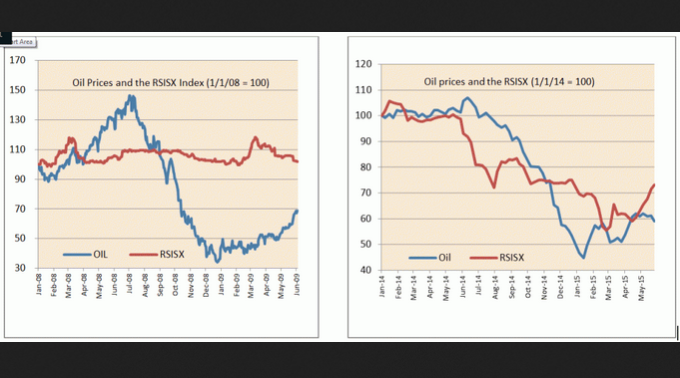 Given the importance of oil for Iraq’s economy, you might think that the price of this commodity would be a key driver for Iraqi stocks. Strangely, this has not always been the case—most notably during the global financial crisis. From July to December, 2008, even as the oil price fell by a terrifying 76%, the Rabee Securities’ RSISX index was practically unchanged, moving serenely sideways as though nothing were happening. (See left chart. The oil price index is based on front-month Brent futures.)

Based on this precedent, I have long believed that ISX investors have nothing to fear from oil price crashes. Politics and the security situation have always seemed to be the main things to watch. The bear market that started in June of last year, for example, looked like an obvious consequence of the fall of Mosul (see this post). And, as I argued here, a turnaround on the battlefield would likely mark a rebound in stocks.

Looking at the price action in oil and the ISX over the past year, however, I’m no longer so convinced that the former can be safely ignored. Once again oil prices have crashed, dropping 58% from June 2014 to January 2015, and this time the RSISX is down big as well. The index fell 45% before finally rebounding in March of this year. (See right chart.)

Have Iraqi stocks and oil prices started to move together in a way that they didn’t before? Looking at my two charts it would be easy to draw that conclusion, but unfortunately there’s not really enough evidence to be sure. It would be premature to claim a cause-and-effect relationship on the basis of a single episode.

But suppose just for the sake of argument that oil is the dispositive factor for Iraqi stocks at this point. The question then becomes, does the oil price rally that started at the beginning of this year still have legs?

The most convincing research I have seen on this question was a note from the Research Center at Miller Tabak. Their analyst found that “in 12 of the 13 major tops/bottoms” since 1998, longer-dated oil futures prices were above spot prices at bottoms and below them at tops. (Traders call the former situation “contango,” the latter “backwardation.”) And as of the June 12 close, December 2021 WTI futures are at a 16% premium to the July 2015 contract, making the crude curve look quite a lot like it did at the 2008 bottom.

If oil really is now driving Iraqi stocks, this finding suggests that the trend for the RSISX, in the short term at least, should continue to be up.

7 Responses to Oil and the ISX: Cause and Effect?