By Editor on 7th September 2021 in Ahmed Tabaqchali, Investment

August started as a typical quiet and slow summer month in which the combination of the scorching summer heat, the holiday season, and the start of the 40-day Arbaeen pilgrimage ensured that the month would be a replay of such months in prior years for the Iraq Stock Exchange (ISX).

However, by the third week of the month, the summer lull was shattered by fireworks in which the market's - as measured by the Rabee Securities RSISX USD Index - 2.5% monthly gain turned into a 9.4% loss, before ending the month with a 3% increase, or a 26.9% increase for the year. 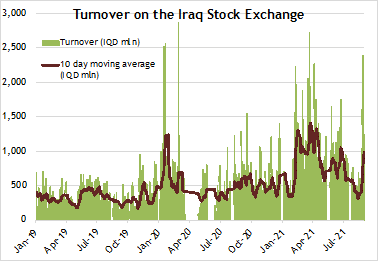 The fireworks were lit by the ISX's decision to implement Parliament's 2019 amendment to "article 12, law 20, 1997" which limited foreign ownership in Iraqi companies to 49%. At the time, the Central Bank of Iraq (CBI) announced that this amendment did not apply to the banking sector, and as such all banks, including those listed on the ISX, were exempt from the 49% foreign ownership limitation. Moreover, at the time of the amendment's passage the common understanding was that the law would see further modifications to ensure that the 49% foreign ownership limit would only apply to companies formed following the amendment's passage. As such its passage in 2019 had no effect on the stocks already listed on the ISX, or so it seemed until mid-August.

The ISX's implementation of "article 12, law 20, 1997" only affected four companies: Dar Al-Salam for Insurance (NDSA) with 82% foreign ownership, Al-Khatem Telecom (TZNI) with 75% foreign ownership, Mamoura Real-Estate Investment (SMRI) with 66% foreign ownership, and Baghdad Soft Drinks (IBSD) with 55% foreign ownership. While the number of affected companies is small, the significance of the implementation is the effect on the market from the oversized role of IBSD. In addition to IBSDS's 36.5% weighting in the Rabee Securities RSISX USD Index by the end of July, it is the market's bellwether stock and regularly accounts a significant proportion of daily turnover. IBSD's stellar growth, of both the top and bottom lines, over the last few years made it a foreign investor favourite and probably the top holding by a wide margin among their investments on the ISX. Moreover, IBSD was among the stocks that started the market's year to-date rally, and was up 42.3% by the end of July - after adjusting prices for a dividend equivalent to a yield of 4.3% announced in April.

Consequently, locals fearing that foreign investors would not be able to buy anymore IBSD shares and will be forced to sell shares to comply with the new foreign ownership limits sent the stock down about 30% over a few days. Given IBSD's bellwether status, it dragged the market with it and led the sharp change in the index from a 2.5% gain to a decline of 9.4%. The market's sell-off surprisingly included the banking stocks - which were not affected by the ISX's decision to implement foreign ownership limitations, and logically a beneficiary of foreign investors' inability to buy into IBSD as more of foreign inflows would be directed to the banking stocks.

Just as these fireworks were about to die down, a new set of fireworks were being lit by the fortunate, but purely coincidentally-timed CBI's approval for one of the country's top foreign investors to increase its shareholding in the Bank of Baghdad (BBOB) from 9.9% to 20.0%. This in turn set off a sharp market rally as local investors rushed to buy the banking stocks that they had sold-off just a few days earlier, as well as discarding their fears and buying IBSD after beating it down earlier. At month's end the performances of the top banking stocks were:

The CBI's approval for one of the country's top foreign investors to increase its shareholding in the Bank of Baghdad (BBOB) from 9.9% to 20.0% is positive for the stock and for the sector. However, the rationale for owning the top banks in the country is based on the revival of fortunes for the sector as discussed last year here in "Banks Lead Market Recovery" and in "Private Sector Deposit & Loan Growth Continues". The dividend announcements cited above, and the earnings of the top banks for 2020 and for the first half of 2021 underpin this argument (source: company reports, Rabee Securities).

The financial performance of each of these banks highlights the different aspects of the recovery in the banking sector, reflecting the different dynamis of these banks. For BBOB and BMNS the gradual recovery continues from the hangover following the heady expansion during the boom years leading up to 2014. BCOI and BNOI on the other hand are much further ahead in the recovery process as each bank is growing its loan book and deposit base which are key metrics that should underpin their future earnings growth.

The market's positive showing for the month, pre and post the fireworks, maintains the market's - as measured by the Rabee Securities RSISX USD Index - overall positive momentum and continues its consolidation after the solid year-to-date gain (chart below). This consolidation will likely unfold over the next few weeks and should, with increased turnover, lead to a continuation of the rally by year end. This would signal the end of the multi-year bear market and the start of a new bull market supported by strong fundamentals as discussed here in "On the Economics of Coiled springs, Crouching Tigers, and Chicken Lickens" 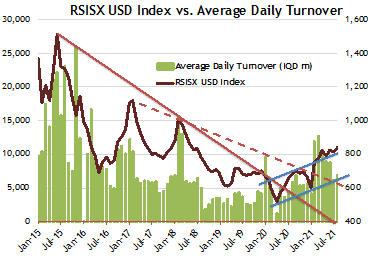 Mr Tabaqchali (@AMTabaqchali) is the Chief Strategist of the AFC Iraq Fund, and is an experienced capital markets professional with over 25 years' experience in US and MENA markets. He is a non-resident Fellow at the Institute of Regional and International Studies (IRIS) at the American University of Iraq-Sulaimani (AUIS), and an Adjunct Assistant Professor at AUIS.