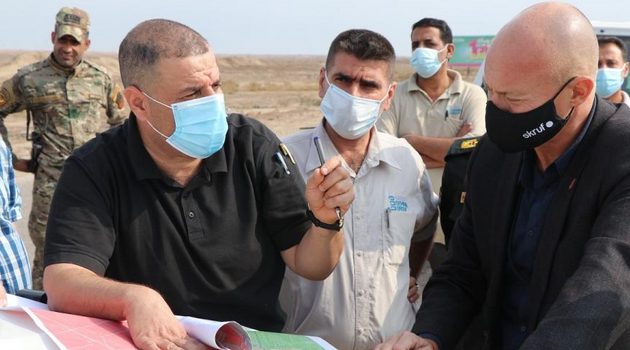 The United Nations Mine Action Service (UNMAS) welcomes the contribution of SEK 50 million (approximately USD 5.7 million) from the Government of Sweden, which will support the Government of Iraq with humanitarian, socio-economic, and reconstruction efforts while protecting vulnerable civilians from the threat posed by explosive ordnance.

Due to successive conflicts in Iraq from 1980 until 2017, as well as the most recent conflict waged by the Islamic State of Iraq and the Levant (ISIL), Iraq is one of the world's most explosive ordnance-contaminated countries, with approximately 2,850 square kilometers of recorded contaminated areas.

The financial contribution from the Government of Sweden will bolster the efforts of UNMAS to support capacity development for a nationally led and implemented explosive ordnance response.

The Swedish contribution will support clearance of explosive ordnance in the liberated areas and southern Iraq and will further support explosive ordnance risk education efforts to protect civilians, with messages and means tailored to reach women and children, as well as internally displaced person (IDPs) and vulnerable communities.

The implementation of the project, which began in December 2021 and will run for 24 months, will assist UNMAS to support the national mine action authorities through technical advice and training for effective management, regulation and coordination of mine action sector. Furthermore, it will build sustainable capacity of the national operators to independently deliver mine action activities.

"Explosive ordnances continue to pose a serious threat to civilians all through Iraq. The widespread contamination is an obstacle for returns and access to basic social services that will require mine action for years to come. Sweden has had a long relationship with UNMAS Iraq and is proud to continue supporting their work including the increased focus on national capacity strengthening during this phase."

"With this generous contribution, Sweden has supported UNMAS activities in Iraq with more than USD 14 million since 2018. The Swedish support will greatly contribute to durable solutions by facilitating the safe return of IDPs to their places of origin, and enabling access to communities in need for humanitarian assistance."

EU Provides Additional $8m for Mine Clearance in Iraq

UK Company to support Mine Action in Iraq