By Editor on 7th February 2022 in Ahmed Tabaqchali, Investment

The market, as measured by the Rabee Securities RSISX USD Index, started the year on a positive note with an increase of 4.2% for January. Foreign selling continued, but its volume and urgency moderated significantly, while local investors continued to take advantage of the opportunity presented by this selling, and comfortably absorbed all that was offered for sale.

The standout performer for the month was the National Bank of Iraq (BNOI) which was up 26.0%, on the back of a 17.1% gain in December­ - in the process recovering about two thirds of the 41.7% decline in November 2021 as its limited liquidity magnified the then concentrated foreign selling. Most other main index constituents were moderately up with AsiaCell Telecommunications (TASC) up 4.4%, the Bank of Baghdad (BBOB) up 2.9%, and Baghdad Soft Drinks (IBSD) up 0.7%; while Al Mansour Bank (BMNS) was flat, and the Commercial Bank of Iraq (BCOI) was down 1.6%.

Banks, as a group, constitute a significant component of the Iraq Stock Exchange (ISX) with a combined market cap of USD 1.9 bln, accounting for 25% of the ISX's total market cap. However, the ISX's market cap is distorted by a 59% weighting made up of the two telecom stocks, TASC and the holding company for Zain-Iraq "Al Khatim Telecom" (TZNI) - both of which are majority-owned by regional telecom companies. Correcting for this abnormality, 57% of the Rabee Securities RSISX USD Index market cap is made up of banks, which are the Bank of Baghdad (BBOB) at 25%, the National Bank of Iraq (BNOI) at 14%, the Commercial Bank of Iraq (BCOI) at 7%, Al Mansour Bank (BMNS) at 6%, and Gulf Commercial Bank (BGUC) at 4%. All figures are for the main market, rounded, and as of the end of January 2022.

The investment thesis for banks is based on the opportunity for the group to grow earnings multiple times from current levels as the country moves towards a full adoption of banking and away from the dominance of cash as both a store of value and a means of economic exchange - cash accounted for about 85% of all transactions in 2020. The key element in the economy's adoption of banking is the growth in bank lending resulting in an expansion in the money circulating in the economy (i.e., broad money), and consequently to an increase in non-oil GDP. Over time, as banks' earnings grow substantially, this should lead to meaningful increases in their valuations.

The extent of the opportunity for Iraqi banks to grow their earnings can be appreciated by considering the level of development of banking in Iraq in a regional context by looking at the ratio of broad money to GDP (chart below). The logic being the extent of the development of a banking system in an economy is associated with the level of increase in broad money, as a consequence of the role that banks play in the creation of money through the provision of credit. Moreover, an increase in broad money can be correlated with an increase in economic activity, which is partly or wholly funded by credit, and ultimately with an increase in goods and services produced in the economy, i.e., the country's output or Gross Domestic Product (GDP). 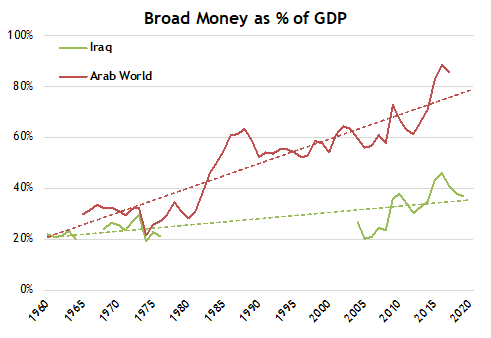 Iraq's banking development was smothered by almost four decades of conflict, starting with the Iraq-Iran war, the brutal sanctions following the invasion of Kuwait, the US invasion in 2003, the ensuing civil war, and ending with the ISIS conflict. However, even though it significantly lags its peer's banking development, since 2003 it has been developing along the same path of natural economic development, but with a significant time lag. It follows that Iraq's banking sector's assets should experience substantial growth over the next few years as it catches up with that of its peers in the region. With that, the sector's valuations should follow.

Following the severe economic disruptions brought by COVID-19, the economy experienced substantial liquidity injections from mid-2020 throughout 2021 from a combination of: (1) government borrowing in 2020, via indirect monetary financing; (2) the Central Bank of Iraq (CBI)'s adoption of an accommodative monetary policy to support borrowers and the economy in countering the negative effects of COVID-19; and (3) sustained oil price increases from October 2020 onwards, which allowed the government to raise spending significantly. These injections stimulated economic activity and accelerated private sector deposit and loan growth - already in effect since early 2018 (chart below). Interestingly, deposit growth outpaced loan growth as seen from the declining loan-deposit ratio indicating that current deposits can sustain further growth in loans. 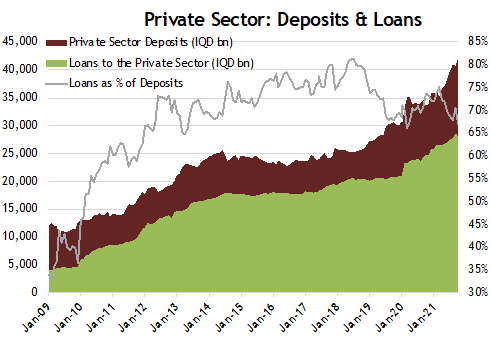 These two metrics, deposit and loan book growth, are key drivers for a sustained increases in banks' earnings, and hence their valuations. Drilling down to the company level within the commercial banking sector shows different performance in terms of these two metrics over the period, i.e., 2018-2021, among the quintet of banks - BBOB, BCOI, BGUC, BMNS, and BNOI - under-review (charts below). 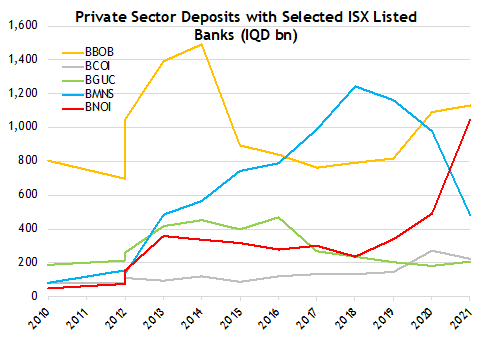 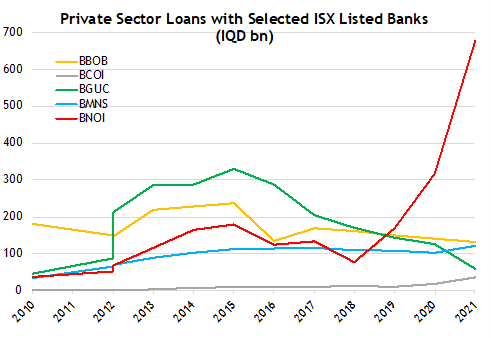 The picture, in terms of the size and direction of both the deposit base and the loan book of each of these five banks, reflects the different strategies pursued by each bank during the heyday of growth before the onset of the 2014-2017 crises. The growth rate and size of each bank's loan book relative to its deposit base up to the crisis, and the associated loan risk-profiles, led to different non-performing loans (NPL's) behaviour during the crises. The pains of the crises exposed both the structural weaknesses of the banking sector as a whole as well as those of the individual banks. Management of each of these banks pursued different strategies to address these structural weaknesses, and the subsequent growth trajectory that is reflected in the progression of their earnings.

At opposing ends of each of these strategies are those pursued by the Bank of Baghdad (BBOB) and the National Bank of Iraq (BNOI) as can be seen from the performance in deposit bases and loan books of the two banks from the end of 2018 to September 2021 (chart above).

Both banks increased their deposit bases to a level that is significantly higher than their peers. During the period, overall private sector deposits grew by 49%, while BBOB's deposit base grew by 43% and BNOI's deposit base grew by 340%. While BNOI's stellar growth in the period benefited from a low base in 2018, it maintained a high growth rate in 2021 which is expected to show a year-over-year growth of over 100% - that is mainly made up of organic growth in addition to contributions from the acquisition of the Iraqi branch network of Lebanon's Bank Audi. The acquisition was discussed early in 2021 here.

However, both banks differ markedly in the strategies pursued regarding their loan books. During the period, overall loans to the private sector grew by 42%, while BBOB's loan book declined by 19%, and BNOI's loan book increased by 780%. Similarly, to its deposit base, BNOI's impressive growth in the period benefited from a low base in 2018, yet it maintained a high growth rate in 2021 which is expected to show a year-over-year growth meaningfully over 100% - in the process matching the combined loan books of the other four banks. Similarly, to its deposit growth in 2021, loan book growth was mostly made up of organic growth in addition to contributions from Bank Audi's branches in Iraq.

Both banks, irrespective of the different strategies pursued, are expected to show strong earnings growth but at different growth rates. These separate strategies for the two banks will be discussed in future updates, throughout the year  that will separately, feature each bank.