By Editor on 19th December 2021 in Ahmed Tabaqchali, Investment

Following a strong performance over the last ten months, the market, as measured by the Rabee Securities RSISX USD Index, was down 12.2% for the month as an unexpected flash flood in the middle of the month sunk the market. However, despite the sizeable drop, the year-to-date performance, so far, is still the best in the last few years at up 10.4%

Such intensive foreign selling would normally spook local retail investors. However, the smart local money tends to appreciate the true value of local assets in a way that eludes most foreign investors, irrespective of their sophistication or experience in frontier markets. This was the case this month as the smart local money feasted on the opportunity provided by such a fire-sale in blue-chip stocks. One local investor explained: "... I keep on buying this stock knowing that the next day brings lower prices, but how else can I acquire such meaningful positions?" or another investor who explained: "... I have no idea how large this foreign selling is, or for how long will it continue at such intensity, yet I will keep on adding to my positions in this stock, as otherwise how often does such an opportunity presents itself ?"  What is not explicitly stated, is the expectation that these stocks will rebound significantly and resume their price momentum once the selling concludes.

The case for owning these stocks is based on their business prospects and likely earnings growth. For mobile telecom operator AsiaCell (TASC), growth is rebounding so far in 2021 following a difficult 2020 in which the company was negatively affected by the lockdown as many of its customers switched to fixed-line broadband from mobile broadband for their internet access. This led 2020 revenues to decline 9.4% year-over-year while pre-tax profit was down 0.6%. However, growth resumed in 2021 with revenues in the third quarter of 2021 (Q3/21) up 25.1% over Q3/20 and up by 11.7% for the first nine-months of 2021 compared to the same period in 2020.

Pre-tax profit increased by 31.1% in Q3/21 over Q3/20, and by 22.0% in the first nine-months of 2021 over the same period in 2020. The continued rebound of economic activity, and crucially the rollout of 4G-LTE introduced in early 2021, should support future growth and lead to the stabilization, and eventually a recovery in both the numbers of total subscribers and in the average revenues per subscriber (ARPU) as seen from the two charts below. By month end TASC was trading at a price earnings ratio of 6.6x, price to book of 1.3x, and with an effective dividend yield of 10.9% 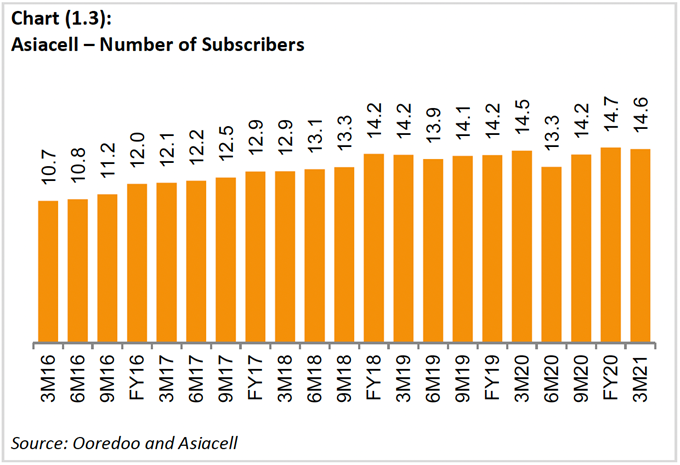 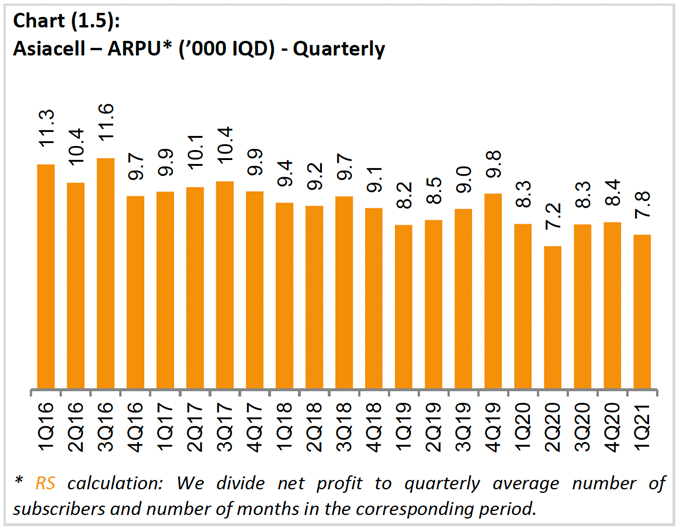 This concentrated selling in TASC, BCOI and BNOI was somewhat mitigated by significant foreign buying in the Bank of Baghdad (BBOB), up 14.3% for the month and 134.1% for the year. BBOB's price momentum for the year was driven by the bank's strong earnings recovery as well as prospects for further improvements as the company's turnaround continues. This price momentum was amplified, somewhat, by expectations that its majority owner, Burgan Bank of Kuwait, would sell its 51.8% stake.

Unusually absent from the intense trading activity, until the last few days of the month when local selling hit the stock, was Baghdad Soft Drinks (IBSD). IBSD had its own share of unwanted excitement in the summer as a consequence of the Iraq Stock Exchange's (ISX) delayed decision to implement the law limiting foreign ownership to 49% as discussed in "Summer Fireworks". The company's stellar growth, of both the top and bottom lines (chart below), over the last few years made it a foreign investor's favourite and probably the top holding by a wide margin among their investments on the ISX - as such foreign ownership exceeded the limits allowed by law.

The implementation of the law on foreign ownership limits meant that the stock missed out on the demand coming from new foreign investments, and thus from the increased price momentum that it usually benefited from. All of which explains local selling that sent the stock down 16.1% in the month, or down 3.8% for the year by end of November - the price is adjusted for a dividend corresponding to a 4.3% dividend yield announced in April. 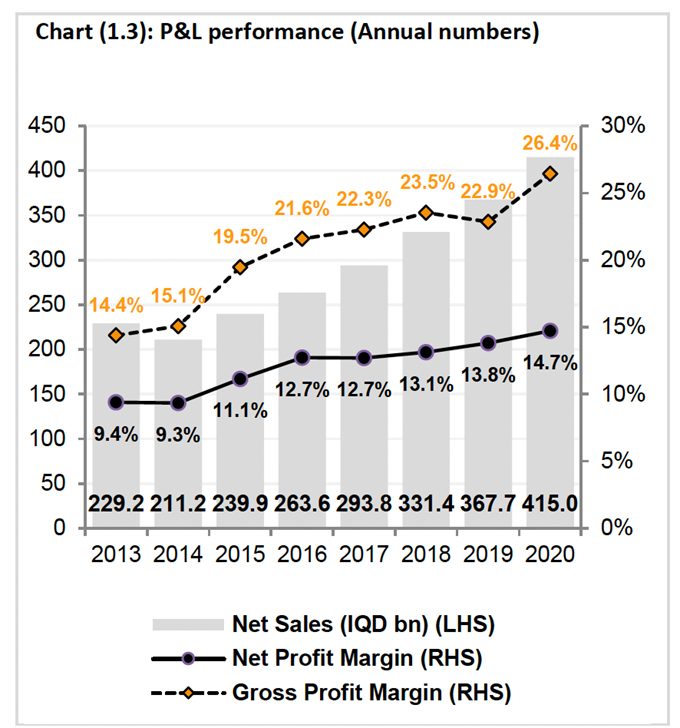 Baghdad Soft Drinks' consistently strong growth of both its top and bottom lines was not affected by the lockdown and the economic havoc brough in its wake in 2020. However, 2021 was a different story. The 22.7% devaluation of the IQD versus the USD in late December 2020 hurt the company's cost structure as the prices for most of its raw materials and packing goods are in USD.

The increases in costs were further exacerbated by the significant worldwide price rise of commodities - in particular imported aluminium used for cans, and domestically sourced sugar. As such, the cost of goods sold increased by 40.7% for the first nine-months of 2021 versus the same period in 2020, overwhelming impressive revenue growth of 26.4%, with the result that pre-tax profits were down 17.5%. In 2020, year-over-year revenues increased by 12.6%, cost of goods sold by 10.9%, and pre-tax profit by 20.9%.

The changed fortunes for IBSD in 2021, however, are temporary and one-off in nature as the high year-over-year cost increases will moderate significantly and most likely decline next year and beyond; while sales momentum will continue to accelerate supported by both its organic strong product line-up as well as the line-ups from is recent acquisitions (chart below). 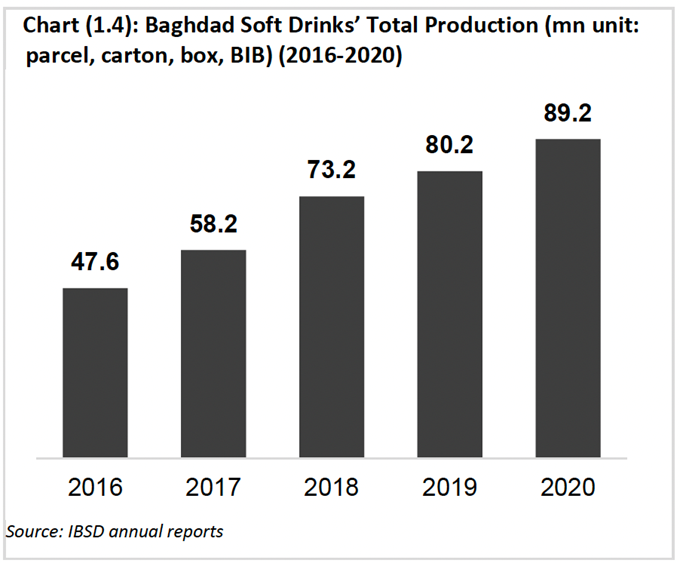 One of IBSD's acquired line-ups is PepsiCo's water brand Aquafina, which came from its first acquisition of the Aquafina licence holder "Ynabee' Al Zawraa Company". According to Rabee Securities, Aquafina's unit production increased by 14% year-over-year in 2020 to account for 21% of total production. The product, like all company products, is manufactured in the company's world-class production plants in Al-Za'franiya on the outskirts of Baghdad as can be seen from the photos below from a recent visit to the company.

Aquafina's production lines with the new 70,000 bottles per hour line added in 2019 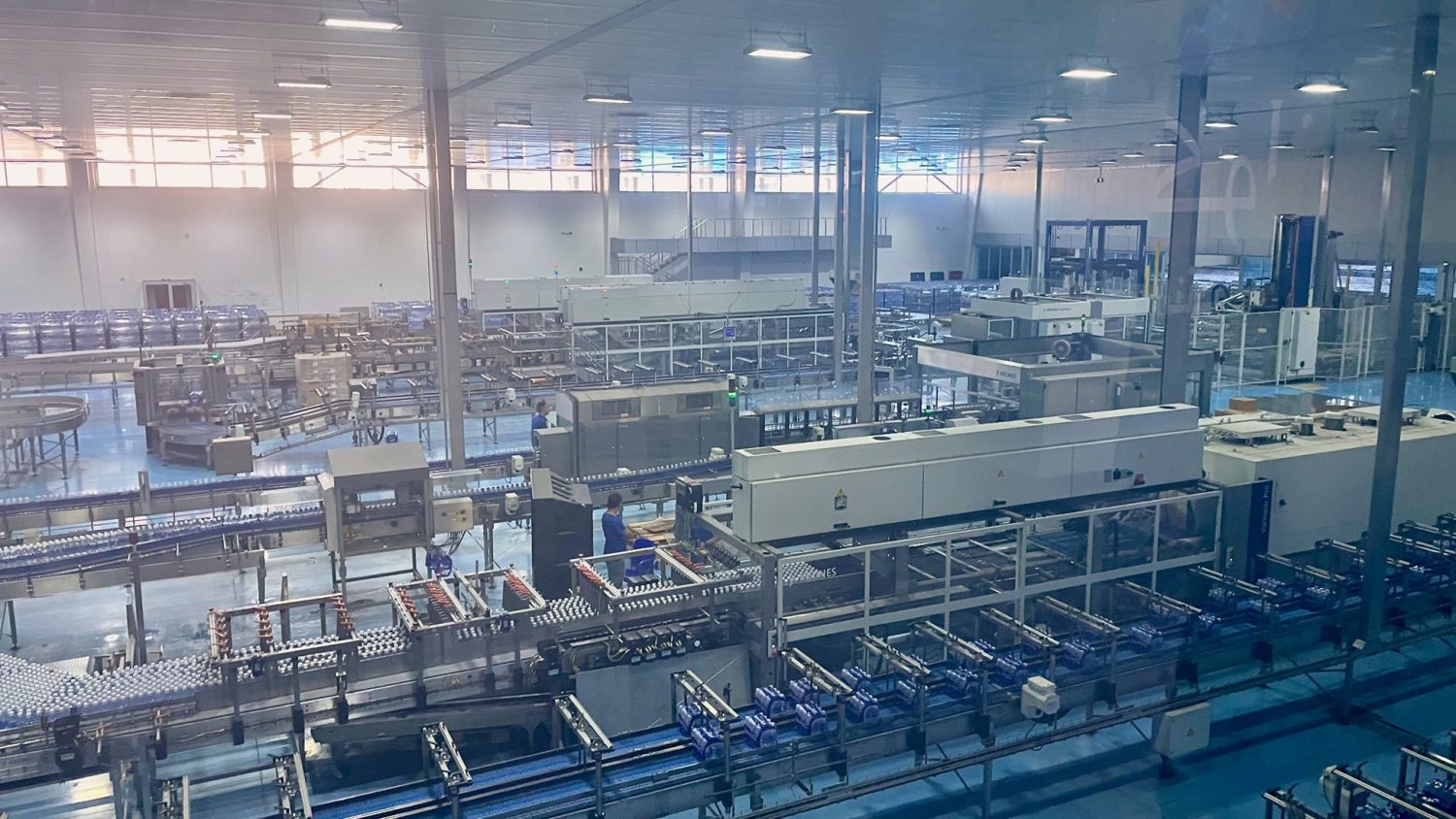 Close up of a section of the 70,000 bottles per hour production line 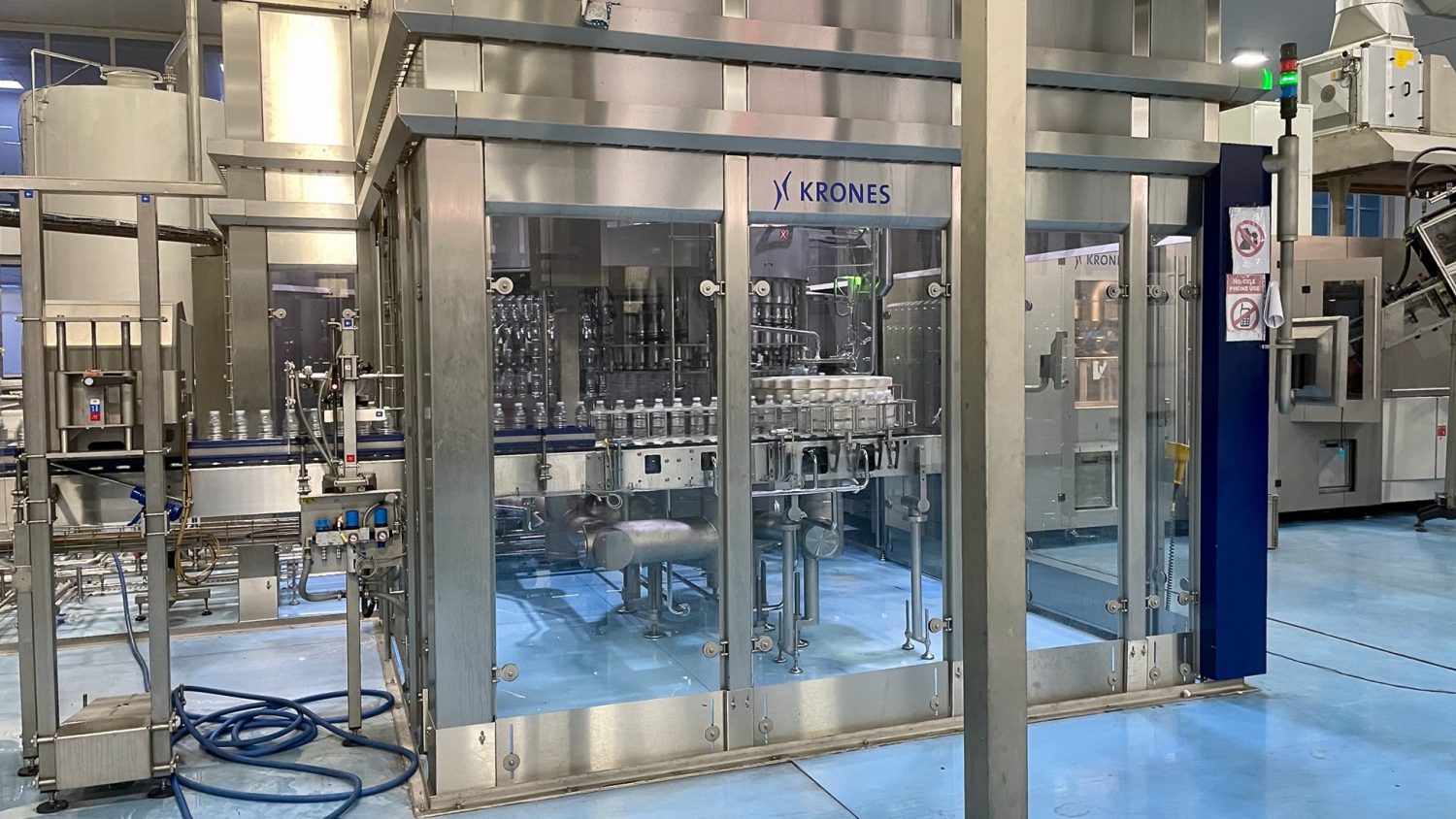 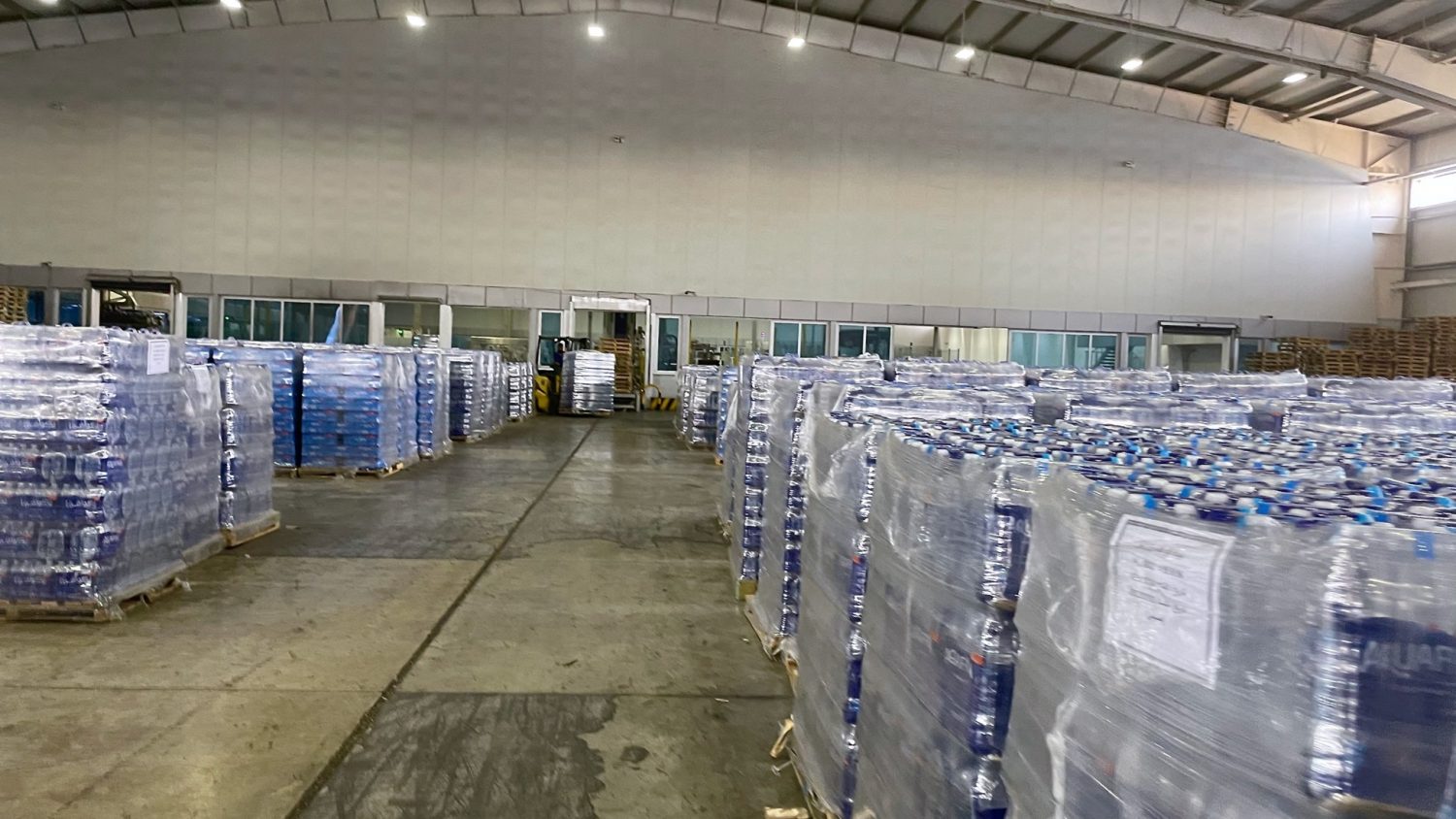