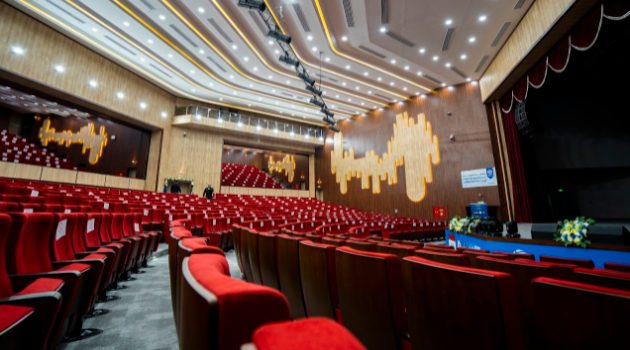 By Editor on 10th February 2022 in Construction & Engineering In Iraq, Iraq Education and Training News

The Theatre Hall, which was the biggest hall in Ninewa, was severely damaged during ISIL occupation and Mosul's liberation. It is rehabilitated by UNDP's Funding Facility for Stabilization (FFS) with financial support from the Federal Republic of Germany, provided through KFW Development Bank.

Rebuilt over 3,250 square meters of the University's campus, adjacent to the bustling Student Centre and Central Library, it is the largest theatre hall in Ninewa. The facility has the capacity to seat around 1000 people.

"From the start of FFS operations in Mosul in early 2017, we prioritized the rehabilitation of Mosul University, due to its symbolic importance as a center of learning. Today, I am very pleased to see how far we have come. I hope the University's Theatre Hall becomes a hub for not just learning but celebration of a peace, art, music and culture," says UNDP Resident Representative in Iraq, Zena Ali Ahmad.

"We are here today because of the generous funding provided by the Federal Republic of Germany, through KFW Development Bank. As one of UNDP's longest standing partners, Germany has made generous contributions to the revival of Mosul, and to stabilization in Iraq," she added.

"The arts, music and scientific discourse are key elements to promote mutual understanding and peace within society," says Peter Felten, Chargé d'Affaires of the Germany Embassy in Baghdad. "Art, music and communication are just as important to a community's well-being as physical and economic security. Germany has funded the construction of this Theatre Hall because we hope that it will connect young Iraqis of all ethnic and cultural backgrounds through the means of artistic self-expression and joint cultural performance, and, thereby, contribute to reviving the famous 'spirit of Mosul' as a city that has always drawn its prosperity from the fruitful interaction between the diverse cultural, religious and ethnic components of its population."

"It is a great pleasure to witness the reviving of this facility which was possible with the generous contribution of the German Government through KfW Development Bank. We look forward to seeing the Grand Theatre Hall as a place of exchange and interaction enriching the cultural life and cultural diversity of this important centre of learning," says Dr. Anna-Christine Janke, Country Director of the KfW Office Iraq.

Mosul University is the country's second-largest institution of higher learning, after the University of Baghdad, with 24 colleges, 40,000 male and female students and 11,000 faculty before the ISIL occupation. Many of the University's buildings were severely damaged or destroyed by ISIL, and library resources and technical equipment were burned, stolen or damaged. UNDP's Funding Facility for Stabilization has rehabilitated facilities under the Colleges of Agriculture, Computer Science, Education, Fine Arts, Mathematics, Medicine, Engineering and Science, allowing tens of thousands of students to resume their studies. The number of students at the University now surpasses enrollment rates before ISIL occupation by over 40 percent.

For photos of the before and after transformation of the Mosul University's Theatre Hall click here.