Market Review: "Oil and the Economy"

The market, as measured by the Rabee Securities RSISX USD Index, increased by 4.5%, and 8.8% for the year. Average daily turnover on the Iraq Stock Exchange (ISX) declined for the second month in a row and is currently at the lower end of the levels that prevailed over the last twelve months.

On a positive note, the Rabee Securities RSISX USD Index has reclaimed the upper-end of the uptrend that it established over the last two years (chart below) - a promising development that is in contrast to that of many markets worldwide. 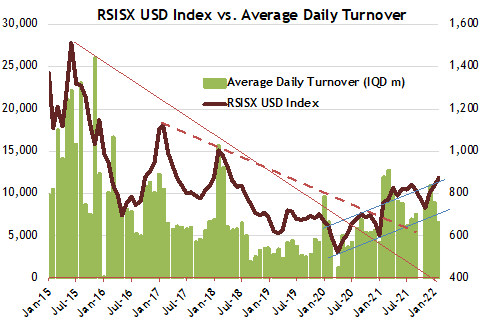 Among the index's constituents, lower-priced Gulf Commercial Bank (BGUC) was up 20.0% for the month, far ahead of the other nine constituents. The next best performing constituent was Bank of Baghdad (BBOB) up 4.7%, followed by Baghdad Soft Drinks (IBSD) up 4.4%, Asiacell (TASC) up 3.3%, the National Bank of Iraq (BNOI) up 2.6%, and Al-Mansour Bank (BMNS) up 2.0%, while the Commercial Bank of Iraq (BCOI) was flat. Decliners were led by Al-Mansour Pharmaceutical Industries (IMAP) which was down 6.5%, followed by National Chemical and Plastics Industries (INCP) down 2.0%, and Kharkh Tour Amusement City (SKTA) which was down 0.3%.

Excluding BGUC, these modest stock price performances for the month haven't yet reflected the increased bounty brought by high oil prices taking Iraq's oil sales to an all-time high for a fifth consecutive month (chart below). The country's high leverage to oil prices and hence to oil sales will have significant positives for both the economy, and the equity market down the line - as a result of the centrality of the government's oil fuelled spending to the economy. 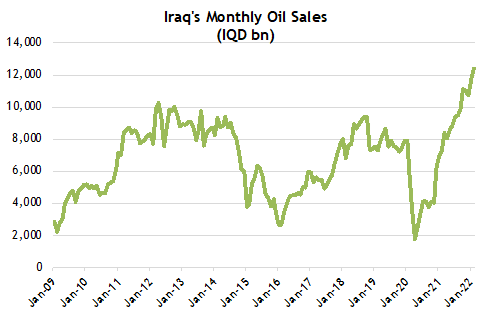 There is a great deal of fear built into oil's current prices, and as such they are unlikely to be sustainable for too long, yet the changed geopolitical landscape as a consequence of the invasion of Ukraine will have significant consequences for the supply and demand of oil. On the demand side, the limited disruptions brought by the Omicron variant on economic activity worldwide since its emergence has solidified market expectations that oil demand in 2022 will return to pre-COVID-19 levels seen in 2019 - there is no reason, at least for now, to expect meaningful change to these expectations following the Ukraine invasion.

However, the same market expectations that supply will itself, like demand, return to its pre-COVID-19 levels will likely be re-examined in light of the pressures that the OPEC+ group will be under in the new changed world order. Prior to the events leading to the current crisis, OPEC+'s plan was to fully unwind by September 2022 the production cuts agreed to in April 2020. However, over the last few months, the plan was facing difficulties as some members of OPEC+ were struggling to return to pre-COVID-19 production levels.

A situation will likely worsen given the wide scope of sanctions levied upon Russia, which will negatively affect its oil production and the production of many of the "+" members of OPEC+ that are closely aligned to Russia. Consequently, supply will likely be meaningfully tighter than anticipated earlier despite many countries releasing oil held within their strategic reserves, the return of full U.S. shale oil production, and possible production increases by Saudi Arabia. Moreover, the changed geopolitical landscape means the return of high-risk premiums to oil prices for a considerable period into the future. 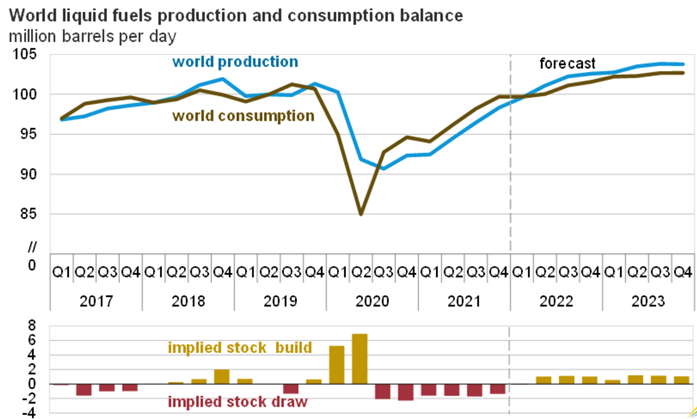 Oil price expectations - a consequence of the changed dynamics of oil's supply and demand - and what they mean for the Iraqi economy, are meaningfully higher than those articulated here in the "Outlook for 2022" which argued at the time that "oil prices at these levels are positive for the country's financial position in that they will provide governments, current and upcoming, with the wherewithal to continue with current expansionary economic policies that will also still allow for the accumulation of budget surpluses. Moreover, they will also lead to multi-year positive balances in the country's current account which in turn will translate into meaningful increases in Iraq's foreign exchange reserves."

Iraq's equity market outlook and attractive risk-reward profile, in the unfolding new world order, is in sharp contrast to that of many markets worldwide. Firstly, the Iraqi equity market is in the process of emerging from a multi-year bear market that saw the Rabee Securities RSISX USD Index at the end of 2020 down by 68% from its 2014 all-time high - unlike many markets worldwide that have had multi-year bull markets.

Secondly, its 8.8% performance year-to-date is in contrast to the sell-offs experienced by other markets in response to the changed world order dynamics.

Finally, the index's 8.8% increase year-to-date coming on the back of a +21.4% return in 2021, is by the end of the month still 58% below the 2014 high - underscoring the potential catch-up upside for the equity market and its attractive risk-reward profile versus other global markets (chart below). 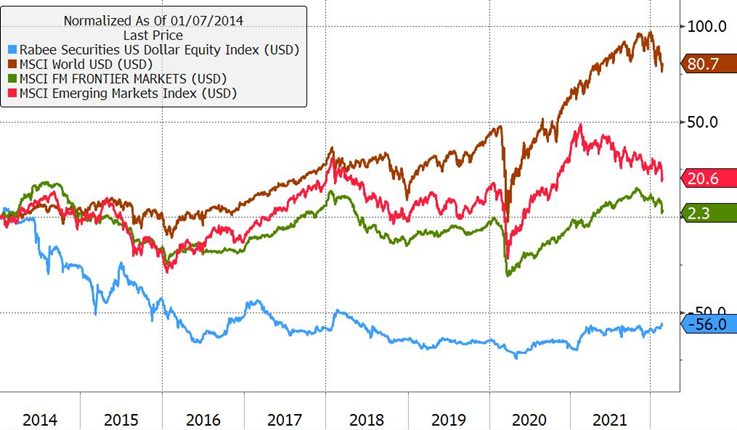 Market Review: The Economy Continues to Hum Along