By Editor on 13th January 2022 in Ahmed Tabaqchali, Investment

The market, as measured by the Rabee Securities RSISX USD Index, had a strong recovery in December with a gain of 10.0%, and ended the year with an increase of 21.4%

November's foreign selling that was concentrated  in a few of the index's top five stocks - discussed in length last month in "Winter Flashfloods" - resumed in AsiaCell Telecommunications (TASC) and in the National Bank of Iraq (BNOI), but not in the Commercial Bank of Iraq (BCOI). Meanwhile, local investors continued to take advantage of the opportunity presented by this unexpected selling (chart below).

The foreign selling continued to be somewhat mitigated by significant foreign buying in the Bank of Baghdad (BBOB), but the stock was up only 7.3% for the month as sustained local selling capped the stock's rise. Nevertheless, the stock ended the year up by an impressive 151.2%, driven by the bank's strong earnings recovery as its turnaround continues to unfold, which was amplified by expectations that its majority owner, Burgan Bank of Kuwait, would sell its 51.8% stake. Continuing to be absent from the intense trading activity was Baghdad Soft Drinks (IBSD), which was up 13.2% for the month and 8.9% for the year. 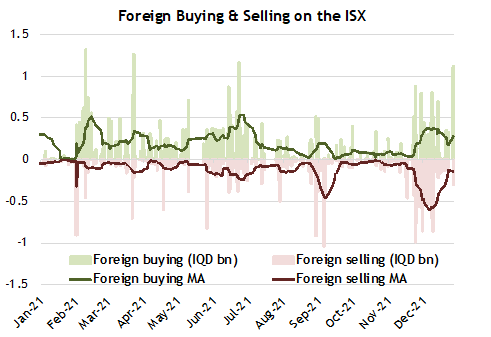 2021 marked a major turning point for Iraq, its economy, and equity market. The economy recovered from the extreme lows of 2020 in tandem with the significant recovery in oil prices, and the return to semi-normality with the easing of the COVID-19 containment measures as discussed in "Continued Momentum".  The equity market responded to these positive developments with a strong performance for the year, with the Rabee Securities RSISX USD Index up 21.4% in 2021, which ended a brutal multi-year bear market that saw the index at the end of 2020 down by 68% from its 2014 all-time high. The index is still 61% below the 2014 high, even after the strong performance for 2021, underscoring the potential catch-up upside for the equity market and its attractive risk-reward profile versus other global markets (chart below). 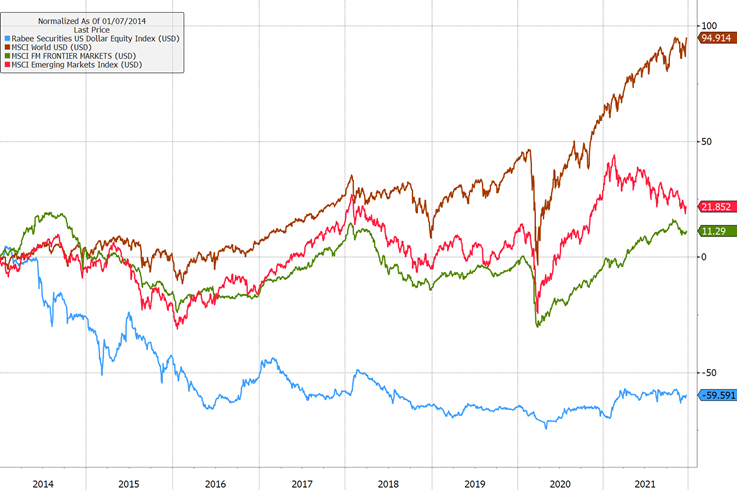 The realisation of the catch-up opportunity for the equity market is dependent on several factors such as the world economy's continued recovery from the disruptions brought about by the pandemic and subsequently the future direction of oil prices, governments' economic policies as expressed in their annual budgets, and the country's political stability.

The emergence of the Omicron variant in the fourth quarter of 2021 questioned the consensus view that the global economic rebound will accelerate in 2022 and continues to be strong into 2023; and with-it expectations for continued recovery in global oil demand. However, the world in 2022 is in a much better position than it was in early 2020. As such, world economic growth will resume as the world learns how to deal with and ultimately contains this new variant, just as it did with the original virus. Consequently, expectations for the future directions of oil prices, as expressed by Brent crude prices, continue to be buoyant as seen from long-term futures contracts into March 2029 (chart below). 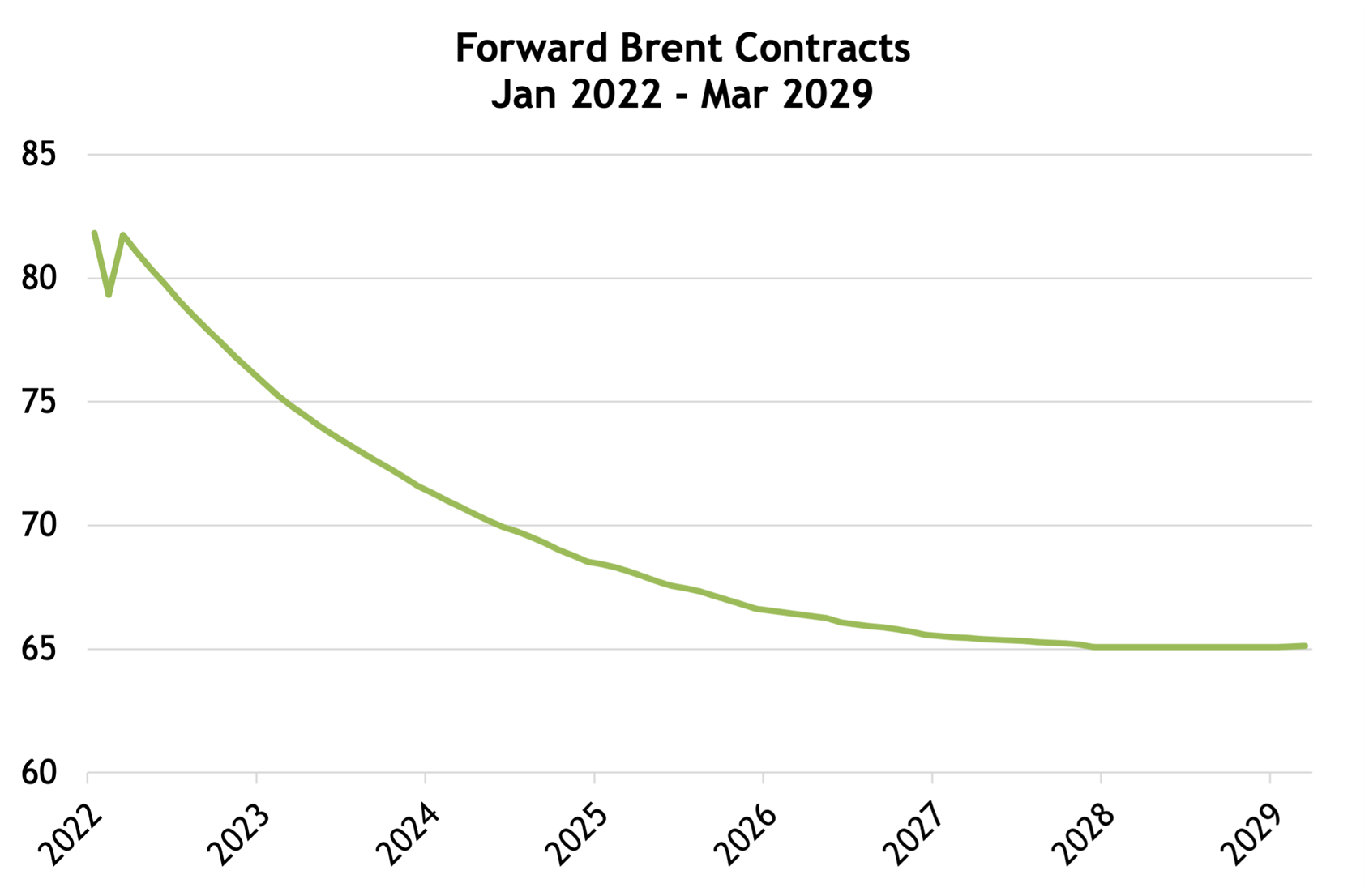 While it's folly to depend on these projections into 2029 given the history of oil price forecasts, the world economy's fundamentals for the next one-two years lead credence to oil price expectations for 2022-2023. Oil prices at these levels are positive for the country's financial position in that they would provide governments, current and upcoming, with the wherewithal to continue with current expansionary economic policies that would also still allow for the accumulation of budget surpluses. Moreover, they would also lead to multi-year positive balances in the country's current account which in turn would translate into meaningful increases in Iraq's foreign exchange reserves.

The Sadrist Movement, best known through its leader Muqtada al-Sadr, achieved significant seat gains at the expense of the Fateh Alliance that represents the country's Popular Mobilization Forces (PMF).

The most likely scenario as discussed here last month was that the composition of the new government will closely mirror the last two and will be strongly influenced by both the Sadrist Movement and the Fateh Alliance; but the relative strength of each will change reflecting the election results. However, the surprising developments of the first session of the new parliament on Sunday January 9th, seem to imply that that the outcome is a government led by the winning coalition, i.e., the Sadrist Movement, or overwhelmingly influenced by them. The noises surrounding this outcome fall into the category of political drama, and as such are unlikely to derail a government formation but nevertheless make it a tortuous one. However, irrespective of the outcomes discussed, any upcoming government would come about with similar tenuous compromises that defined the 2018 government. As such, its need to gain public support implies that it will likely follow the 2018 government's populist policies as expressed in its expansionary first budget for 2019.

Given that government formation is unlikely to occur before the end of March 2022, the current caretaker government and the upcoming government would continue implementing the 2021 expansionary budget until the end of 2022. Moreover, the new government's first budget for 2023 will likely be more expansionary than the 2021 budget.  Consequently, these budgets will sustain and re-enforce the current consumer-led economic rebound into more sustainable economic growth, which in turn should lead to a continued recovery in corporate profits.