By Editor on 7th July 2022 in Ahmed Tabaqchali, Investment

The market, as measured by the Rabee Securities RSISX USD Index, was up 3.4% for the month, and up 5.1% for the year.

The last two months of profit-taking continued into the first week of June, at which point it was halted by the passage of the supplementary budget bill on June 8th. This in turn stabilised the market, whose technical picture continues to be positive, as its two-month decline has only taken it to within the middle of its two-year up-trending channel (chart below) - an uptrend that ended a brutal multi-year bear market.

While there is the potential for the market to resume its decline, the macroeconomic fundamentals discussed here two months ago support thesis that the two-year uptrend should continue even if the upward slope moderates somewhat.

This picture contrasts favourably with the majority of global markets, which underscores Iraq's attractive risk-reward profile and diversification benefits versus these markets, especially considering that Iraq's economy, unlike most economies worldwide, is a significant beneficiary of the current high oil price environment. 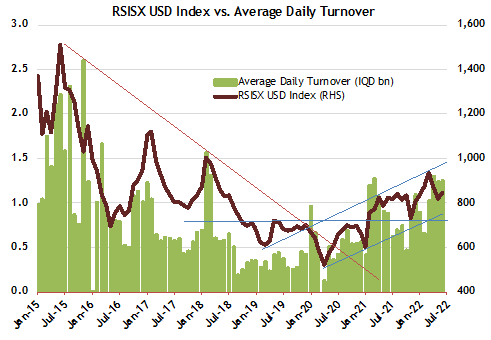 Passage of the Supplementary Budget Bill

The delays in government formation, following the parliamentary elections on October 10th, meant that the current caretaker government, lacking the authority to propose a 2022 budget, was restricted to spending 1/12th of the 2021 budget on a monthly basis in 2022. While the 1/12th spending rule allowed the government to continue funding its current expenditures (salaries, pensions, social security and the provisioning of goods and services), and some of the investment spending that was initiated in 2021; it nevertheless prevented it from fulfilling its continuing investment spending requirements. Crucially the 1/12th rule prevented the government from using the bounty of higher oil prices in alleviating the harmful effects of the sharply increasing food prices on the population. The supplementary budget, in combination with the 1/12th spending rule for 2021, would in effect be in lieu of a 2022 budget. As such the total effective budget for 2022 would be about USD 92 bn, an increase of 23% above that for 2021; and made up of the 1/12th rule spending allocation of about USD 75 bn for 2022, and the supplementary budget's spending allocation of about USD 17 bn.

The government has the wherewithal to fund the supplementary budget and still build a substantial budget surplus that it, or a future government, can utilise to continue pursuing expansionary budgets. Iraq's oil export sales are estimated to be at USD 117 bn for 2022, if Brent crude prices were to average USD 100 per barrel (/bbl) for the year as discussed here. Contrasting oil export sales with estimated spending for 2022 of USD 92 bn provides an idea of the expected budget surplus after accounting for the government's non-oil revenues as well. Iraq's extreme leverage to oil is manifested in the translation of every USD 1/bbl change in Brent's average price for the year, into about USD 1 bn in oil export sales, and as such in the current high oil prices environment, there is an upside to Iraq's oil export sales estimates. Given that the year-to-date average for Brent crude is about USD 106/bbl, and that Brent future contracts imply an average of USD 111/bbl for the balance of the year, then Brent crude would average USD 109/bbl in 2022 leading to about a USD 9 bn upside to Iraq's oil export revenue estimates (chart below).

However, there is also downside to Iraq's oil export revenue estimates stemming from the inhibiting effects of higher oil and food prices on the world economy, and consequently lower global demand for oil. Magnifying these growth inhibiting effects would be the almost synchronized interest rate increases by central banks worldwide to combat the inflationary effects of the higher oil and food prices. Conversely, the changing world order following the invasion of Ukraine, and the extent of and likely extended duration of the sanctions imposed on Russia, will alter the dynamics governing the relationship between world economic growth and global oil demand. In the short and medium terms, Western governments' need to lessen dependence on Russian oil, and to ensure their energy security, would mitigate the negative effects on global oil demand from weaker world economic growth. All of which should lead to sustained period of higher oil prices as argued here in "Oil and the Iraqi Economy", in which Iraq would be a major net beneficiary. 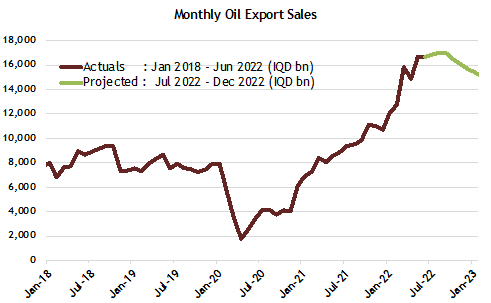 (Source: Iraq's Ministry of Oil, AFC Research estimates, projections are based on assumptions of average Iraqi oil price at a USD 3.5/bbl discount to Brent crude as given by future contracts in investing.com, and the unwinding of the OPEC+ deal by September 2022. Data as of June 30th)

The passage of the supplementary budget bill in June, means that most of the USD 17 bn of increased spending would be concentrated in the second half of the year, which in the process would inject sizable liquidity into the economy in a relatively short period. This in turn, should lead to a re-acceleration in the year-over-year growth in the amount of money circulating in the economy (broad money). The timing of the supplementary budget's passing came just as broad money growth is estimated to have slowed down significantly in May 2022, as the effects of the prior stimuli were exhausted after multiple months of sharp year over year increases. All of which underscore the centrality of government spending in the economy, acting as a super-efficient mechanism for transferring oil revenues into economic activities. 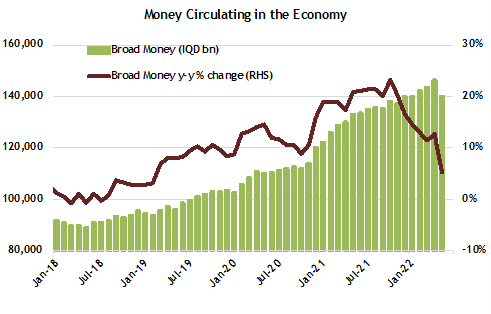 The passage of the supplementary budget bill would prolong the current impasse over government formation into the near future, contributing to the political uncertainty following the surprising results of the October 2021 parliamentary elections as discussed in "Continued Momentum".

Increasing the political uncertainty, in the second week of June, the largest parliamentary bloc, and the apparent winner of the 2021 elections - the Sadrist Movement - resigned its seats in parliament in protest over the 10-month impasse over government formation. This was seen as an opportunity for the apparent loser in the election - the Fateh Alliance - to control parliament and ultimately government formation, however emerging internal conflicts within the alliance seems to be preventing this. Nevertheless, these developments, as dramatic as they might appear to be on the surface, could be part of the continued political manoeuvring of a very tortuous government formation process. This line of reasoning is rooted in the curious timing of the resignations immediately following the passage of the supplementary budget bill, which was championed by the resigning Sadrist Movement; and its passage in parliament was assured due to the large parliamentary block it commanded, before its resignation, with its partners.

It seems that the continuation of the status-quo, despite the continued political uncertainty, would be a preferred solution for all political parties, as it would preserve the country's ethno-sectarian parties' share of the state's resources achieved in the 2018 elections. While it's unclear if the status quo would continue for a few more weeks or months, or how it would the impasse over government formation be resolved; yet it's clear that the compromise over the passage of the supplementary budget bill would keep the wheels of government spending turning, and with that the lifeblood of the economy.

The market's benign response to the unexpected political developments in the month, and its continued positive reaction to the passage of the supplementary budget bill, supports the argument made above. Moreover, the market's action is similar to that following the late adoption of the 2021 budget in April 2021 - which at the time led to a continuation of its rally as discussed here in April.

While the political uncertainty would continue to dampen foreign interest in Iraq's equity market until the government's formation a few months later, Iraq's value proposition is compelling as its economy is a huge beneficiary of the high crude oil price environment. And its equity market is in the very early stages of emerging from a multi-year bear market, and as such its risk-reward profile is very attractive against most global markets.