By Editor on 8th November 2021 in Ahmed Tabaqchali, Investment

The market, as measured by the Rabee Securities RSISX USD Index, was up 2.4%, and 25.7% for the year. While 10 months do not make a year, and the political uncertainty might bring some unexpected negative surprises, the positive macro picture argues for a solid finish to the year for the market

For the month among the Rabee Securities RSISX USD Index's constituents the standout performer was the National Bank of Iraq (BNOI) which was up 33.3% for month to account for a 16.2% weighting in the index - up substantially from its 10.7% weighting when it was added to the index in July. The stock's strong performance for the year, up 114.3%, after adjusting for a dividend corresponding to a 9.2% dividend yield in March, has been driven by the bank's strong multi-year performance in growing its deposit base and loan book - as first discussed in "Private Sector Deposit & Loan Growth Continues" in December.

BNOI's strong execution over the last few years was driven by a combination of a new management team in 2017 that reorganized the bank, focused on the ignored retail section of the market, and crucially had an evaluation of the real Iraq risks, as opposed to the much higher perceived risks. The success of BNOI's retail strategy in attracting sticky consumer deposits, and subsequently growing its retail loan book, demonstrates the potential opportunity from the adoption of banking in Iraq's cash dominated economy.

Building on this opportunity, in late 2020 BNOI strengthened its position in the nascent and high potential banking sector with the takeover of the Iraqi branch network of Lebanon's Bank Audi. In the process, BNOI increased its assets by 32%, vaulting it into the top three banks on the ISX as ranked by asset size. The acquisition was discussed in detail in "Of Assassinations and Corporate Activities".

In addition to a focused strategy, the bank is benefitting from the strong economic rebound from the extreme lows of last year brought about by the significant recovery of oil prices and the return to semi-normality with the easing of the COVID-19 containment measures. The World Bank, in its latest economic update on October 21st, reported that in the first half of 2021 (H1/2021) non-oil GDP expanded by over 21% over H1/2020.

This recovery can be seen from Google's mobility data (chart below), which also suggests a continuation of a recovery in non-oil GDP in the second half of the year - although the year over year comparisons will be lower as H1/2020 included the initial lockdown. In particular, activity in the crucial sectors of retail and grocery has recovered by the end of October by up to 90-170% above the levels that prevailed pre-2020's great lockdown. Interestingly, the recent uptick in the workplace and downtick in residential sub-indicators reflect an almost complete return to pre-lockdown activity. 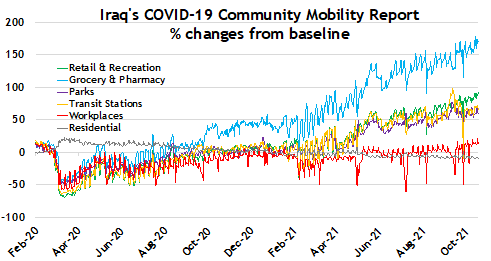 (Baseline is the median, for the corresponding day of the week, during January 3rd -February 6th, 2020.

The global economic rebound and subsequent recovery in oil prices will continue to provide fuel for Iraq's economic rebound into 2022 and beyond. However, it can be argued that the Rabee Securities RSISX USD Index - with its 25.7% gain year to date by end of October notwithstanding - has not discounted the transformation of the economic rebound into an economic recovery in 2022 and beyond. Moreover, the index's gains for the year have not translated into meaningful foreign fund inflows into the market. However, this will likely change by year end given that the future direction of oil prices plays a major role in foreign perception of Iraq and thus foreign fund inflows.

The latest data show that both current forward futures prices and analyst median forecasts suggest continued high oil prices into early 2024, albeit at less than the current unsustainably high prices (chart below). Oil prices at these levels into 2024 are transformative for Iraq, not only providing governments with the fuel to implement expansionary budgets (see below), but that would still allow for the accumulation of budget surpluses, and lead to a multi-year positive current position allowing the country to build significant foreign reserves.

The misconceptions regarding the results of the parliamentary elections held on October 10th, could dampen foreign interest in Iraq's equity market until the government formation a few months later. These were the sixth such elections held since the 2003 invasion, yet for the first time, they were held under a first-past-the-post system ­- reluctantly adopted by parliament a year ago in response to the youth-led multi-month country-wide demonstrations demanding political reform in late 2019. The combination of a low turnout, a new post-2003 low at 36% of eligible voters, and new electoral system produced some real surprises and some seeming surprises.

The major real surprise was the gains for the first time by the youth-led pro-reform movement, which while small in total number of seats, are promising for the future and will likely encourage more participation by the youth in future elections. However, far more relevant is the seeming surprise of the vastly different fortunes in the seat count of the two rival coalitions - the Sadrist Movement best known through its leader Muqtada al-Sadr and the Fateh Alliance that represents the country's Popular Mobilization Forces (PMF). Despite their fierce rivalry, the two coalitions together defined the political scene and led the two government formations post the ISIS-conflict. The first government formation was following the 2018 elections, held in May as discussed in  "Elections, the Economy and the Stock Market"; while the second was the formation of the current government in May 2020 as a consequence of the resignation of the 2018 government in response to the youth-led country-wide demonstrations as discussed here in late 2019.

The seat gains by the Sadrist Movement and the seat losses by the Fateh Alliance, from election to election, rather than reflecting a fundamental change in the fortunes of the two rival coalitions, reflect the successes and failures of two different election strategies used in the new first-past-the-post system as the total number of votes won by each coalition were almost the same - with the Fateh Alliance slightly outperforming, in vote count, the Sadrist Movement according to preliminary election results. The resultant parliamentary seat count held by each coalition, the above reasons notwithstanding, will play a role in the formation of the upcoming government, however this is only a part of the process of government formation which has been defined by the post-2003 ethno-sectarian power-sharing political order. For an analysis of the election results see a recent report by Chatham House that provided the basis for the analysis here.

The most likely outcome is that the composition of the new government will closely mirror the last two and will be strongly influenced by both the Sadrist Movement and the Fateh Alliance, but the relative strength of each is influenced by the seat gains and losses in the current elections. Thus, the current drama playing out in Iraqi regular and social media by the rival coalitions is a combination of both posturing and sabre-rattling by each as part of the multi-month political negations leading to government formation. While, this means months of political uncertainty, the one certainty is that the 2021 expansionary budget, as discussed here in more detail last month, will continue to be in force for the next 15-18 months with the current high oil prices fuelling this expansionary spending. This in turn will sustain the consumer-led economic rebound into economic growth, which in turn will eventually lead to a continued recovery in corporate profits. Thus, the conditions are in place for the Rabee Securities' RSISX USD Index to emerge from its multi-month consolidation and resume its rally.