By Editor on 7th August 2022 in Ahmed Tabaqchali, Investment

The market, as measured by the Rabee Securities RSISX USD Index, was down 5.6% for the month, and down 0.8% for the year.

The combination of the start of one of the two hottest months of the year (first chart below), and the nine-day Eid holiday early in the month, contributed to the evaporation of local market liquidity and to a decline of over 40% in the average daily turnover (ex-block trades) from the prior month.

Most local participants, worn down by a much higher number of sandstorms than usual since mid-April as discussed here in "Sandstorms, and a stroll down Al-Mutanabbi Street", took advantage of the longer than usual Eid holiday, to escape an unusually hot July (second chart below), and took away liquidity with them in the domestic version of the classic stock market adage "Sell in May and go away".

Despite the resumption of the market's decline, its technical picture continues to be positive, as the RSISX USD Index's decline is within its two-year up-trending channel (chart below) - an uptrend that ended a brutal multi-year bear market. The macroeconomic fundamentals discussed here three months ago that the market's uptrend will likely remain in force.

However, the market's upward slope might moderate, or go sideways in consolidation pattern, as the liquidity injection - as a consequence of the passage of the supplementary budget - works its way through the economy and eventually into the equity market. The significance of the passage of the supplementary budget to the economy, and the transformative impact of the higher oil price environment on Iraq, was discussed here last month in "Supplementary Budget Stabilises the Market" 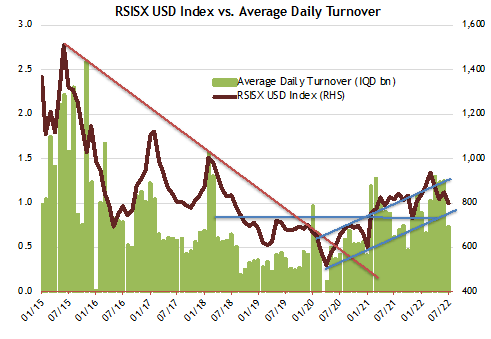 The July heat took its toll as nerves frayed and the political impasse, as a consequence of the surprising results of the October 2021 parliamentary elections, came to a boil on the last day of the month with the occupation of parliament by the supporters of the Sadrist Movement - the apparent winner of the elections with a plurality of seats; yet whose parliamentarians resigned in June in protest over the 10-month impasse over government formation. As perplexing as it may sound, the motivation for the occupations, were moves by the apparent losers in the election, the Fateh Alliance, to assert control over parliament which was only made possible by the resignations.

The Fateh Alliance, which morphed into the Coordination Framework with the addition of groups who fared just as badly in the elections, seemed to have papered over its internal divisions, and started the government formation process, thereby leading to events that culminated in the occupation of parliament. Not to be outdone, the supporters of the Coordination Framework staged counter-demonstrations denouncing the occupation of parliament, raising fears of an escalation of the conflict. However, the ensuing melodrama did not develop into violent clashes between supporters of the opposing sides, who mostly confined their activities to the theatrics of street demonstrations.

Both parties in the conflict, irrespective of their fierce rivalry, have been members of the all-inclusive governments formed following successive elections post the US invasion in 2003. Importantly, as major players in the post-2003 ethno-sectarian political system, both parties have built substantial patronage networks, and consequently could risk the loss of the wealth and sources of economic rent created by these networks, if their conflict evolved into a violent confrontation.

Therefore, the most likely outcome, instead, would be a renegotiation of the post-2003 elite bargain, with a redistribution of power and re-allocation of resources to accommodate the increased relative strength of the Sadrist Movement. This would be reflected in an agreement for holding a new set of national elections that would solidify the renegotiated elite bargain with "no major winners nor major losers" - a modified version of the Lebanese political logic of "neither the winner nor the loser."

A new set of national elections, however, would be months away, and as such the current caretaker government would remain in its role and would continue implementing the expansionary economic policies discussed here in the past.

While the political uncertainty would continue to dampen foreign interest in Iraq's equity market until the political impasse is resolved over the next few weeks, Iraq's value proposition is compelling as its economy is a huge beneficiary of the high crude oil price environment. And its equity market is in the very early stages of emerging from a multi-year bear market, and as such its risk-reward profile is very attractive against most global markets.