After a long series of attacks against the police, it is the Iraqi government which appears to have been the primary target in the latest bout of attacks in Iraq.  A spate of at least 26 bombings and shootings around the country left dozens of people dead on 20 March. Incidents were recorded in Abu Ghraib, Baghdad, Balad Ruz, Bayji, Daquq, Dhulu’iyah, Hillah, Karbala, Latifiyah, Mosul, Muqdadiyah, Ramadi, Samarra, Tikrit and Tuz Khurmatu, stretching from Ninawa in the north to Babil in the centre of the country.

Targeting
While the police were amongst those targeted in the attacks, the provincial government, councillors and even the Ministry of Foreign Affairs were also singled out. Given the co-ordination of the attacks at a time of heightened security in the country it is likely that a large organisation was responsible. Suspicion falls on al-Qaeda in Iraq, given the tactics and targeting. If they are indeed behind the attacks their motive would likely be an attempt to discredit the government and send a signal to the many world leaders looking to visit Baghdad for the upcoming Arab League Summit on 27-29 March. 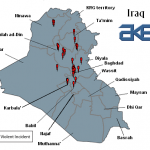 The Government Response
In the aftermath of the violence security has been tightened even further and traffic conditions are reported to be chaotic in the capital. As well as an existing curfew on motorbikes and carts in Baghdad, the government announced earlier today that the country is to have a national holiday for one week from 25 March. Ministries will shut so government workers do not need to travel to work. This will likely limit congestion, but with additional security checks it is likely that travel will still be subject to disruption. Furthermore, terrorist groups will still likely be able to conduct attacks. They continue to defy the increased security procedures of the government to great effect.

AKE Advice
Personnel should factor in additional time for any planned movements, and try to minimise non-essential travel around Baghdad at this time. Organisations which continue to work during the holidays may also wish to provide temporary accommodation for their Iraqi staff at their place of work so that they can avoid the anticipated commuter disruption of the coming weeks. It is also advisable to stock up on non-perishable foods, medicines and other supplies in case it becomes difficult to obtain such goods during the holiday.