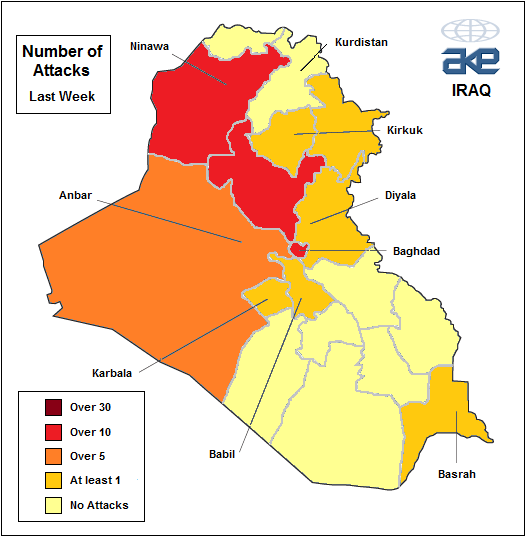 By JohnDrake on 30th March 2012 in Weekly Security Update

Levels of violence rose in Iraq last week despite heightened security measures put in place ahead of the Arab League Summit. It was the worst week since a series of terrorist attacks targeted Shi’ah pilgrims during Arba’een at the beginning of January and the fourth-worst week recorded over the past six months. At least 73 people were killed and well over 270 injured in nationwide incidents although this figure is liable to be higher given the difficult reporting climate surrounding the spate of attacks recorded on 20 March. Violence was concentrated in Mosul, Baghdad and the central provinces.

North
While many of the attacks took place in the central provinces, levels of violence also rose in the north of the country. Conditions have eased once again over the last two days but the area remains one of the more hazardous parts of the country. Incidents remain concentrated in Mosul, although Kirkuk is also volatile, with an ongoing risk of inter-communal tensions, bombings and shootings, with the latter two tactics being particularly targeted against the police. Kirkuk also remains one of the worst parts of the country for abductions. AKE will be issuing its next quarterly kidnap and ransom report next week. For further details or to purchase a copy please email [email protected].

Centre
With the Arab League Summit taking place in the capital the operating environment was rendered very difficult this week, with conditions still being affected at the time of writing. Routes around the city have been closed to cars and even pedestrians in many areas. The official schedule for re-opening remains subject to change and there is little that organisations can do except prepare for last-minute alterations in the security plan. Mobile network coverage has also been restricted, making communications very difficult. Anyone requiring medical assistance or evacuation by the authorities in the city are advised to telephone the public telephone number 404 for assistance The same number can be used to report suspicious activity.

South
The south of Iraq saw heightened security measures over the course of the week like many other parts of the country. However, conditions remained quiet and there were no major incidents reported.

One Response to Weekly Security Update for 30th March 2012