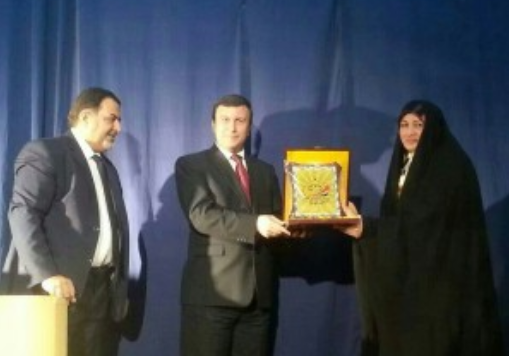 By Madeleine White, capacity building specialist and Editor-in-Chief of nina-iraq.com

This article was original published by Nina Magazine, (www.nina-iraq.com) and is republished here with their permission.

Me’aad Hussein Sahar addresses women through “Nina” in this interview with Sana Bekki, telling us to: Always be proud to be an Iraqi woman.

Me’aad is the first Iraqi woman to be recognized as a “Goodwill Ambassador” in Human Rights and Psychological Health from the United Nations Institute for Science and Health in Canada. She is an educator who was raised in Karbala and continues to work there works as a head teacher.

She is also a member of a subcommittee for an accelerated learning program which spans Iraq. Me’aad Hussein Sahar is a woman who, without hesitation, described herself at the beginning of this interview saying,

“I’m a woman who came from humble roots. I was raised as a poor child of simple peasants and I had brothers who were working and studying at the same time.”

She is one of a handful of Iraqi women leaders, who have spent years serving Iraqi youth in-country, giving them the opportunity to catch up on education their have missed. She has also achieved success in areas of psychological health, human rights and peace. Her work at the accelerated learning program opened has new prospects for her to deal with people’s issues and help solve them.

This resulted in the Canadian Institute for Science and Health choosing her as a “Goodwill Ambassador”. Me’aad was the first Iraqi woman to get such a title. Pioneering women, like Me’aad, who worked hard to open pathways and serve their country, make every Iraqi woman proud (including me!) and indeed make us wish to follow her example.