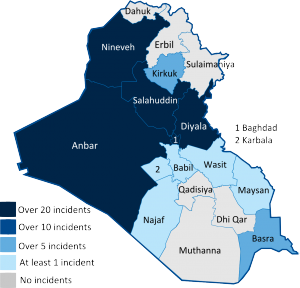 The Kurdistan Regional Government (KRG) hosted a series of diplomatic missions and foreign conferences this week, as Peshmerga troops celebrated some of the most decisive military victories since the start of the ISIS counter-offensive in August 2014. While heavy fighting continues to rage across Anbar and the central territories, aid convoys to the besieged inhabitants of Mount Sinjar are now reported to have resumed following the removal of ISIS units from positions across disputed areas of Nineveh province, with EU chiefs pledging increased humanitarian and military support to the KRG authorities over the coming year in a sign of growing international recognition for the regional authority. While officially unrelated to wider political developments, the arrival of PM Abadi in Erbil from 23 December is also likely to reflect the growing stature of Barzani’s government, amid a wider policy of détente by the Baghdad administration.

Kurdish forces deliver a lightning assault across Nineveh to break the siege of Mount Sinjar as ISIS-ISF units engage in a heated battle for control of Baiji town. In a carefully planned advance, combining KRG Peshmerga, coalition air support, Syrian YPG and Yazidi tribal militias, allied forces inflicted a series of dramatic defeats on ISIS units this week, regaining control of districts west of Mosul and bringing the frontline all the way to the militant strongholds of Tal Afar and Sinjar town. Starting from 17 December, villages and neighbourhoods were cleared west of Hardan close to the KRG border, facilitating the advance of Peshmerga artillery and elite troops to bombard ISIS infrastructure. Driving the operation appears to have been the objective of ending the ISIS encirclement of the remaining Yazidi population on Mount Sinjar, achieved on 19 December with the opening of a direct road between the refugee camps and the Kurdish hub of Dahuk. Aerial cover provided by coalition forces once again played a decisive role in maintaining the allied momentum, also likely to have been aided by the diversion of large numbers of ISIS units to the battlefields of Baiji and Diyala this week. Should the Kurdish forces be able to maintain these new acquisitions, supply routes to the militant-held city of Mosul are expected to become increasingly constrained over the coming month.

ISIS re-direct armour for assault on Haditha, as coalition airstrikes are repeatedly launched to prevent militants gaining ground. Security environment in Baghdad remains unchanged. Signs of an impending offensive in western Anbar were first recorded on 18 December when large groups of militant fighters began to gather around the outlying suburbs of Haditha, sparking concerns among local ISF units as ISIS tanks and armoured vehicles began to move from Ramadi and across the Syrian border. While initial forays into the town were halted on 20 December by the intervention of French air support, militants continue to challenge ISF for control of the Baghdadi and other outlying suburbs with further assaults expected over the coming week. As the last major outposts of government control between Hit and the Syrian border, the loss of Haditha and the nearby Ain al-Asad air base would prove disastrous to the ISF’s Anbar campaign and is likely to be resisted at all costs. To the south-east, militant operations were primarily directed in the capital’s southernmost district, Mahmudiya, with fighters deploying a VBIED on 18 December amid multiple armed raids on checkpoints in a bid to challenge ISF dominance for the strategic “gateway of Baghdad.”

The security environment across the south has improved with the passing of the pilgrimage season, with low-level violence largely confined to the poorer suburbs of Basra, Karbala and remote tribal areas over the reporting period. ISF operations in the southern Baghdad suburbs close to Jurf-al Sakhar have now been resumed and are currently proving effective in blocking ISIS incursions from the group’s local headquarters in nearby Fallujah. While major attacks, including VBIED strikes against ISF checkpoints represent a potential threat in the northern Babil area, a more pressing danger is the risk of IEDs and other concealed explosives, which continue to be reported by IA sweeps in the Mahawl and Misiab neighbourhoods. By contrast, ISIS activity south of Babil has all but ceased for the present. Where shootings incidents continue do occur, as witnessed in the case of the attempted assassination of a former education director in Abu al Khasaib on 18 December, local rather than ideological grievances remain the chief motivation. 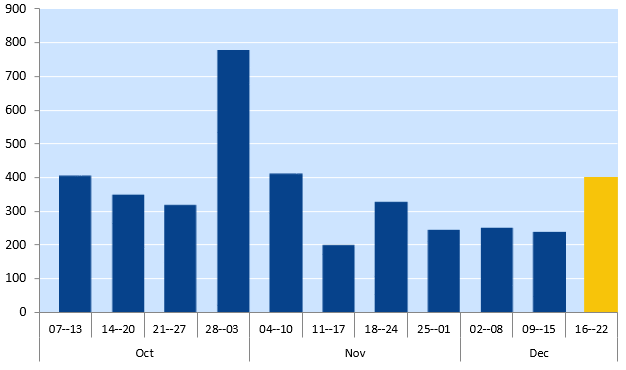