By Editor on 11th October 2021 in Ahmed Tabaqchali, Investment

The market, as measured by the Rabee Securities RSISX USD Index, ended an unremarkable month down 3.3%, but up 22.7% for the year.

The last 30 days of the 40-day Arbaeen pilgrimage took place throughout the month, ending on September 28th, and as it progressed life slowed down to a crawl. The Arbaeen pilgrimage is among the world's largest annual pilgrimages, with the last official figures, before the onset of COVID-19, showing about 14 mln pilgrims taking part in 2019, during the 40 days.

About two-thirds came from within Iraq and a third from Iran, Lebanon, the Gulf states, Pakistan, India, the U.K., and the U.S. The pandemic had severely affected the number of pilgrims in 2020, especially the number of foreign visitors though things have started to recover in 2021.

The pilgrimage climaxes at the end of the 40-day mourning period, Arbaeen in Arabic, of the death of Prophet Muhammad's grandson, Imam Hussein. Leading to the climax, pilgrims walk to Karbala from across Iraq.

Famed Iraqi hospitality is in full swing throughout the period as residents along the pilgrimage's many routes to Karbala, and especially in Karbala itself, open their homes to the visiting pilgrims providing them with shelter and food, as documented in a BBC story in 2017. Some stunning scenes of the pilgrimage can be seen in a 2020 piece by a New York Times photojournalist.

During the month the average daily turnover on the Iraq Stock Exchange (ISX) was in-line with the low levels of the last three months, while the market, as measured by the Rabee Securities RSISX USD Index, continued with its consolidation after the solid year-to-date gain (chart below). 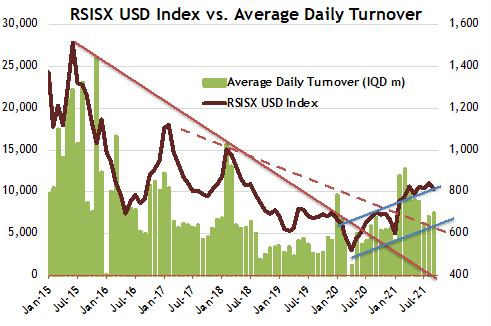 Among the index's constituents, Baghdad Soft Drinks (IBSD) - the index's largest component by weight at 30.1% and the star of last month's fireworks - ended the month down 6.1%, while the next largest component by weight, at 20.0%, the Bank of Baghdad (BBOB), was down 2.4%. Other banks in the index were all down, with the Commercial Bank of Iraq (BCOI) down 6.0%, the National Bank of Iraq (BNOI) down 5.6%, Gulf Commercial Bank (BGUC) down 5.3%, and Al-Mansour Bank (BMNS) down 1.7%. Only three of the index's ten components were up, with Asiacell (TASC) up 5.0%, National Chemical and Plastics Industries (INCP) up 4.2%, and Al-Mansour Pharmaceutical Industries (IMAP) up 3.9%.

Nevertheless, a ho hum month was a welcome reprieve from the fireworks of the prior month and the likely political uncertainty ahead of parliamentary elections on October 10th, which in turn could extend the suspense for a few more months if recent history is a guide. Government formation negotiations following parliamentary elections have, over the last few years, lengthened to span many months as a function of the country's increasingly fractured political landscape which makes reaching a consensus extremely time-consuming.

However, irrespective of the political uncertainty before, during, and after the election, the one certainty is that on the eve of the elections Parliament will be dissolved, and the current government will become a caretaker government until a new one is formed - most likely just before the second quarter of 2022 (Q2/2022). Consequently, as a caretaker government, it no longer possesses the authority to propose bills to Parliament including the 2022 budget bill that would have been due to be presented to Parliament for review and debate around the same time as the start of the elections.

The promising aspect of this is that the government, according to the constitution's "1/12th rule", will implement the current spending plans of the 2021 expansionary budget until a new government is formed by Q2/2022. The rule essentially means that the government can spend up to a twelfth of the appropriations made in 2021 on a monthly basis until a new budget bill is passed by Parliament. Moreover, the new government that will likely be formed by Q2/2022 will not have enough time to propose a 2022 budget and so will continue to implement the 2021 budget throughout the year until a new 2023 budget is approved by the new Parliament - an event unlikely to take place before the first quarter of 2023.

The significance of this is that the expansionary 2021 budget, which added fuel to the market's rally at its passage at the end of  March, as discussed here in "Market Extends the Rally", will continue to be in force until early 2023. This in turn means the sustainability for the conditions that led to the consumer-led economic rebound as discussed here in "On the Economics of Coiled springs, Crouching Tigers, and Chicken Lickens".

Sustaining the government's ability to execute the expansionary 2021 budget throughout the next 18 months is the bounty brought by high oil prices, which are likely to continue throughout 2022 given the stronger than expected demand and less than expected supplies. Brent crude is seen to average USD 68.9 per barrel in 2021 and USD 70.7 per barrel in 2022, according to Oxford Institute for Energy Studies' latest forecast made in September.

All of which supports the market's consolidation thesis and argues that a likely subsequent rally in the market, as measured by the Rabee Securities' RSISX USD Index, will be supported by expected high government spending, fuelled by oil revenues, that would sustain the consumer-led economic rebound, which in turn will eventually lead to a continued recovery in corporate profits. 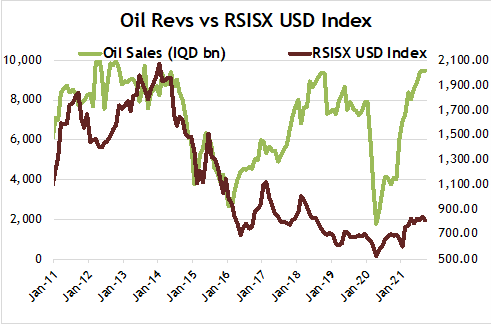