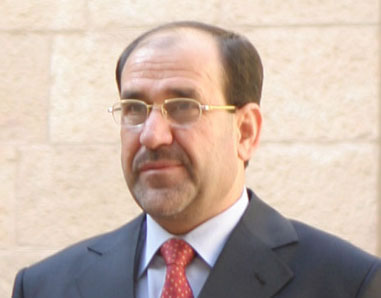 The full text of Iraq's program for government is as follows:

1. Maintaining and commitment to Iraq's constitution completely, and that any subsequent modifications will be in accordance with Article 142 of the Constitution, and activate all of its articles without selective and follow the work of the committees formed in accordance with the Constitution and in particular Article 140. Adoption of legal contexts reference head of the government work to resolve all differences and problems On the basis of outstanding and committed to the political forces and members of the Council of Ministers by the Constitution and the curriculum as is the common government of the forces and parties participating in the political process.

2. Achieve political process, and expand participation in it, in addition to enhance democracy.

3.Consolidation of state institutions and building the rule of law via adoption of asset management and institutional accordance with the principle of citizenship and be regarded as the ministries and state institutions of national identity and property of the people and not the identity of the party, the minister and its personal and prevent any monopoly or domination or tutelage of any class or groups of formations governmental, administrative and public institutions.

4.Human rights respect in the way that ensures expression freedom to all ethnic sides according to law.

5.Renunciation of aggression and terrorism, discrimination and address all acts of aggression, terrorism and discrimination by the enemies of the Iraqi people, led by Saddam's Baath and terrorist groups, and commitment to the fight against sectarianism and to prevent any attempt to return the country to the eras of tyranny and dictatorship and terrorism, blasphemy and the confiscation of the other, and to condemn crimes of deportation and the Anfal and the mass graves, war and adventure, and policies Aggressive and coups.

6. Ensure the right to live in peace and security and freedom for all Iraqis in their homeland, of all religions, nationalities and creeds, and that Iraq will be the components of the social model of brotherhood, coexistence and tolerance