By JohnDrake on 19th January 2011 in Weekly Security Update

Levels of violence fell last week, but the past 48 hours have seen three suicide attacks in the central provinces, killing dozens and injuring over 200. As with the recent spate in assassinations in the centre of the country, the main target of the suicide bombers were state employees and members of the Iraqi security forces. Shi’ah pilgrims were also killed in one of the attacks, and with more religious worshippers set to travel to Karbala over the coming week for Arba’een, further similar roadside attacks should be anticipated.

The north has remained quieter than normal for over a month now but last week the Kurdish Asayesh uncovered a cache of weapons in Arbil which were believed to have belonged to Sunni terrorist group Ansar al-Islam. It has not been reported how old the cache was or whether or not it was intended for use in the near future. Terrorism remains a potential risk in Kurdistan, although conditions are significantly safer than the rest of the country, not least because of the professionalism of the local security forces. In the neighbouring and more hostile province of Ninawa an Iraqi soldier shot and killed two US troops and injured another last week. Military sources indicate that the attacker was killed immediately after. Occasional skirmishes have occurred between military forces during training exercises in the past. The problem is raising fears that the Iraqi security forces may not be ready for their increased responsibilities once the US military has withdrawn by the end of the year.

The calm of a relatively quiet week in the central provinces was shattered by three suicide attacks over the course of the last two days. Over 60 people were killed and 200 injured in the incidents which targeted police recruits in Tikrit (Salah ad-Din province) as well as police forces, provincial councillors and Shi’ah pilgrims around Ba’qubah (Diyala province). By targeting state employees and members of the security forces the attackers are intent on weakening the state and undermining public confidence in their abilities. The Shi’ah victims of the latest attack may have been coincidental as they were travelling in the same convoy as the provincial councillors. Nonetheless, a large number of Shi’ah worshippers will congregate and travel to the holy city of Karbala over the coming days in preparation for the religious period of Arba’een. Pilgrims were targeted on their way to Karbala for the holy period of Ashura in December but attacks were less common than in previous years. If the Iraqi security forces increase searches at security checkpoints and restrict travel flows to key areas of worship it may result in a similarly lower number of attacks in the coming week. Nonetheless attacks should still be anticipated, particularly on main routes and around mosques in the central region and in the capital. Already terrorist cells are reported to have been detained around Karbala city itself. As well as the risk of attacks in the coming week personnel are advised to factor in extra time for journeys around the region as congestion may be worse than normal and routes may be closed in the event of any violence. 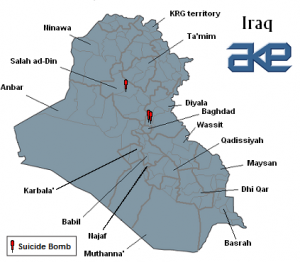 Location of the latest suicide bombings

While the south has been relatively quiet over recent weeks a jail break in Basrah highlighted not only that criminal elements remain a concern in the region, but that many have accomplices and allies within the authorities and state security forces. This is a concerning blend and demonstrates that the security clampdown in Basrah in 2008 did not eradicate the ties between militants and the public sector. A roadside bomb also targeted a US military patrol on a main route near Basra Airport and while no casualties were reported it should serve a reminder that vehicles – particularly high profile vehicles associated with foreigners – remain at risk of being attacked in what is otherwise a more stable part of the country.

One Response to Weekly Security Update for 19th January 2011