The market, as measured by the Rabee Securities RSISX USD Index, was up 6.9% for the month, and up 16.2% for the year.

The index's increase this month extends the prior month's gain in which it reclaimed the upper-end of the uptrend channel that it established over the last two years (chart below). Technically, the index's medium-term pattern looks like a reverse head and shoulder's bottoming formation, with the recent gains indicating a breakout to the upside. Supporting this formation's interpretation are the overall average monthly trading volumes over the two-year up-trend which are meaningfully higher than those that prevailed during the prior downtrend.

While technical patterns are of limited value in nascent frontier markets like Iraq, nevertheless the market's positive action for the second month in a row since the Ukraine war started is a positive development in sharp contrast to that of many markets worldwide - underscoring its attractive risk-reward profile and diversification benefits versus these markets. 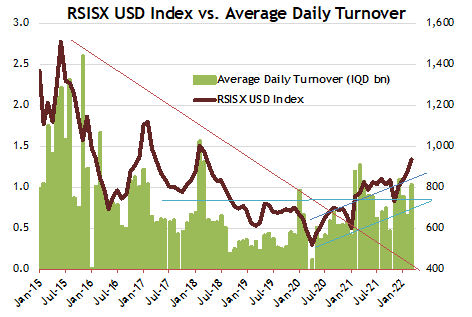 Among the index's constituents, the best performing constituent was the Bank of Baghdad (BBOB) up 19.8%, followed by Baghdad Soft Drinks (IBSD) up 6.9%, Commercial Bank of Iraq (BCOI) up 3.3%, and Asiacell (TASC) up 2.6%, while Gulf Commercial Bank (BGUC) was flat for the month. On the other hand, Al-Mansour Pharmaceutical Industries (IMAP) was down 0.4%, National Chemical and Plastics Industries (INCP) was down 2.1%, the National Bank of Iraq (BNOI) was down 2.5%, and Kharkh Tour Amusement City (SKTA) was down 5.1%.

The Opportunity in Retail Banking

The banking sector's role in the Iraq investment thesis was reviewed here in February arguing that it is based on "the opportunity for the group to grow earnings multiple folds as the country moves towards a full adoption of banking, and away from the dominance of cash, as both a store of value and a means of economic exchange - cash accounted for about 85% of all transactions in 2020. The key element in the economy's adoption of banking is the growth in bank lending leading to an expansion in the money circulating in the economy (i.e., broad money), and consequently to an expansion in non-oil GDP. Over time, banks' earnings grow substantially, which should lead to meaningful increases in their valuations."

Moreover, the update touched upon the opposing growth strategies pursued by the Bank of Baghdad (BBOB) and the National Bank of Iraq (BNOI) - two of the top banks in the country and among the top five constituents of the Rabee Securities RSISX USD Index.

Unlike most banks in the country, the National Bank of Iraq (BNOI)'s strategy was based on growing its retail operation as part of its overall offering of a full spectrum of banking services. The catalyst for this strategy was the government's "Tawteen" project, launched in 2016, to use the banking system to pay the salaries and pensions of its public sector employees and pensioners instead of making these payments in cash as was done in the past. This involved, among other measures, digitizing the whole processes of making these payments - a project undertaken by a home-grown company, International Smart Card (ISC), through the use of a biometric card dubbed "Qi Card."

The State-Owned Banks (SOBs) - benefiting from their monopoly position with the public sector, as holders of its deposits and extenders of its loans - provided basic banking services to most of the users of these cards. However, SOBs, for the most part, offer poor banking services, apart from the basics of providing the means for cash withdrawal of these funds as well as the issuance of loans to the public sector and its employees.

Thus, a massive opportunity exists for private sector banks, with the inclination and ability, to compete with SOBs by offering enhanced banking services to the millions of public sector employees and pensioners. A sense of the size and potential of the Tawteen opportunity can be appreciated by considering that as of 2021, public sector employees numbered around 3.2 million, whose annual salary payments totalled about IQD 42 trillion (USD 29 billion) - these numbers don't include the 600,000 or so employees of State-Owned Enterprises (SOEs) who participate in the Tawteen initiative. Moreover, these sums are likely to grow over the near term, as governments flush with the enhanced bounty of high oil prices, are likely to pursue expansionary budgets as discussed here most recently in the outlook for 2022.

The National Bank of Iraq (BNOI) systematically pursued this opportunity through the development of Tawteen dedicated teams and centres that vigorously courted the public sector and its employees, offering value-added services such as electronic banking, mobile banking, linkages with mobile money wallets provided by the two largest telecom operators, and high-quality customer services. The process developed over the years and accelerated in 2021 as it reached a critical mass of public awareness, so that by the end of 2021, BNOI counted over 100,000 Tawteen customers, with over 15% from the private sector, spanning over 200 public and private sector employers.

This endeavour translated into significant growth in overall customer (retail, SMEs, and corporates) deposits and loan books (chart below). Moreover, by the end of 2021, retail (mostly Tawteen customers) deposits accounted for 35% of total deposits and 59% of total loans. Organic growth accounted for a large part of deposit/loan growth in 2021, but it was enhanced by contributions from the acquisition of the Iraqi branch network of Lebanon's Bank Audi - discussed here in "Of Assassinations and Corporate Activities" 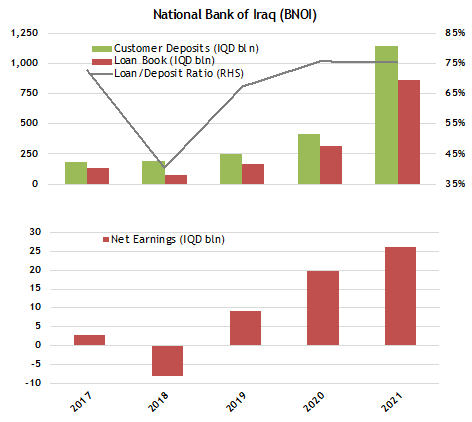 Crucially, this impressive growth in customer deposit and loan generation did not come at the expense of profitability or loan quality. Company data as of the end of 2021 show that the aggregate cost of funds, or interest expense percentage, was 1.6%; while the aggregate return on funds lent, or interest income percentage, was 9.4% for a net spread of 7.8%. However, the actual spread on a normalized basis is probably significantly higher. This is because: (1) The interest paid/charged is made throughout the year as deposits and loans are generated; (2) The 173% year-over-year growth in customer deposits and loans means that cumulative interest paid/charged by year-end does not reflect the size of deposits/loans for the full year.

Moreover, company data as of year-end 2021 show that aggregate non-performing loans (NPLs) were 4.1% of total loans - however, this is the gross NPL ratio which includes the interest income due from these NPLs, and so the net NPL ratio was 2.7%. Crucially gross retail NPLs were around a quarter of the gross aggregate rate - underscoring the attractiveness of the retail segment of the market, mostly shunned and under-served by most banks in the country. 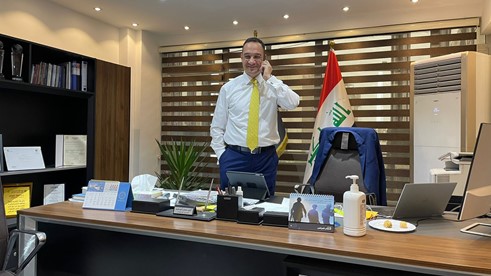 (Source: AFC Research, during a meeting with BNOI's management team on March 30th)

However, this growth presents several challenges, among which the main one is the need to attract long-term deposits in an economy dominated by cash as both a store of value and a means of economic exchange - cash accounted for about 85% of all transactions in 2020. Consequently, most private sector (retail, SMEs, and Corporates) deposits are in the form of current accounts and demand deposits - the average was 74% of aggregate deposits at all private sector banks by the end of 2020. BNOI's year-end 2021 current accounts and demand deposits accounted for 64% of the total, with retail current accounts and demand deposits accounting for 41% of total retail deposits. BNOI's figures in comparison to the national average reflect positively on BNOI's services. Yet BNOI's future growth, as it pursues the Tawteen opportunity, will be capped by the amounts of long-term customer deposits held with it- especially as the aggregate loan to deposit ratio (LTD) was 76% by the end of 2021.

To meet its growth objectives, BNOI's management, over the last two years, embarked on a number of initiatives to attract such long-term, primary retail, deposits. The latest of which were unveiled at the end of the month are: (1) A campaign to attract fixed short-term retail deposits for one, two, and three years offering attractive rates of 9.9%, 10.5%, and 11.0% respectively; (2) the planned issuance of IQD 75 billion (USD 53 million) in three-year IQD corporate bonds, probably a first for any company in Iraq, with rates likely to be similar to those offered for fixed-term deposits.

These rates compare favourably to the recent sovereign offering of IQD 1 trillion (USD 690 million) in two-year and four-year IQD Bina bonds at rates of 6% and 7% respectively. The Bina bonds were aimed at the retail sector but were for a large part subscribed to by the banks for their own books - implying that sovereign rates of 6-7% on two-four year bonds had a limited appeal for the retail segment. As such, the rates recently offered by BNOI should be attractive enough to generate retail interest. Management, in recent discussions, revealed that the first few days of the campaign for attracting fixed-term deposits generated about IQD 20 billion (USD 14 million) in deposits - which could grow meaningfully over the campaign's duration.

This review is not a detailed company analysis discussing all aspects of the bank, instead it is meant to highlight the opportunity in retail banking in Iraq as pursued by the National Bank of Iraq (please note disclosure * below); is not meant to be construed as individual investment advice or a recommendation or solicitation to buy, sell or hold shares in BNOI. Full details on the National Bank of Iraq, are available on the Iraq Stock Exchange (ISX)'s web site, and research reports are available from Rabee Securities. 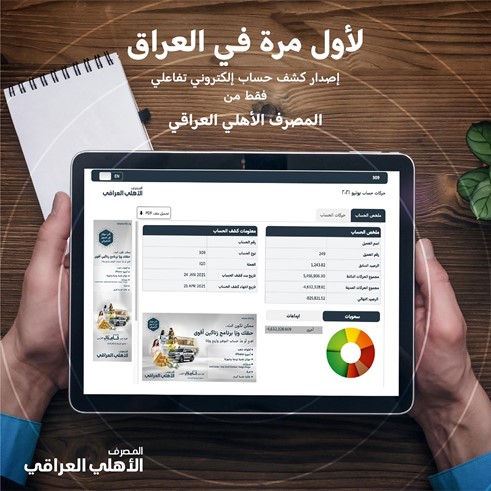