By Editor on 6th October 2022 in Ahmed Tabaqchali, Investment

Markets Continue to Discount and Look through the Political Impasse

The market, as measured by the Rabee Securities RSISX USD Index, was up 3.7% for the month, and up 5.0% for the year - a year-to-date performance that is now well ahead of most global benchmarks.

The market's average daily turnover showed signs of revival with the end of the 40-day Arbaeen pilgrimage on September 17th, which coupled with the RSISX USD Index's second consecutive monthly increase moving the index towards the upper end of its two-year up-trending channel (chart below), are encouraging signs and reinforce the market's positive technical picture.

The macroeconomic fundamentals discussed here five months ago argue that the market's two-year uptrend will likely remain in force, however, its upward slope might moderate, or even go sideways, as the liquidity injection - as a consequence of the passage of the supplementary budget - works its way through the economy and eventually into the equity market.

The significance of the passage of the supplementary budget to the economy, and the transformative impact of the higher oil price environment on Iraq, were discussed here in "Supplementary Budget Stabilises the Market". 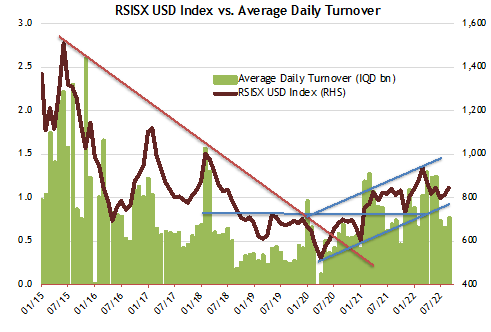 Political Stalemate and the theatrics of violence

The end of the violent clashes of August 29th-30th gave way to a truce of sorts between the Sadrist Movement (the apparent winners of the October parliamentary elections), and the Coordination Framework (the apparent losers of these elections); as both parties sought to defuse tensions, especially during the important last 10 days of the 40-day Arbaeen pilgrimage. After which, moves by the Coordination Framework to cement its parliamentary advantage - made possible by the resignations of the Sadrist Movement's parliamentarians - through holding a parliamentary session on September 28th, raised fears of a repeat of the series of events that led to the violent clashes of last month.

Following this script, armed groups headed to Baghdad's Green Zone, and Baghdadies were readying themselves for a repeat of the violent clashes of August 29th-30th. However, after a few hours of minor armed exchanges, the script was flipped, and the melodrama ended quicker than the lead up to it - so quickly that the city's cleaning teams began cleaning at night, and Baghdad returned to normal before midnight.

Youth movements' plans for demonstrations on October 1st, to commemorate the third anniversary of the October 2019 youth-led nationwide protests, raised fears that these demonstrations would be taken-over by supporters of the Sadrists Movement to be used in their conflict with supporters of the Coordination Framework. These fears did not materialise; however, this does not remove the potential for further conflict as the political impasse over government formation is far from over - but they are highly improbable to be anywhere as violent as those of the last month.

As written here over the last two months, both parties in the conflict, irrespective of their fierce rivalry, have been members of the all-inclusive governments formed following successive elections post the US invasion in 2003. Importantly, as major players in the post-2003 ethno-sectarian political system, both parties have built substantial patronage networks, and consequently could risk the loss of the wealth and sources of economic rent created by these networks, if their conflict evolved into a civil war.

In the meantime, the status-quo is retained by the parties in conflict, which despite the continued political uncertainty, would be a preferred solution for all political parties, as it would preserve the country's ethno-sectarian parties' share of the state's resources achieved in the 2018 elections, while they work on the torturous process of modifying the elite bargain that has kept them in power since 2003 to accommodate the post-election developments.

Markets Continue to Discount and Look Through the Political Impasse

For the second month in a row, and in a similar fashion to last month, the markets were discounting and looking through the political impasse. The Rabee Securities RSISX USD Index was mostly flat throughout the month but began to rise just as the political impasse was showing signs of turning to violence to close the month up 3.7%, and up 5.0% for the year. Whereas in the currency market of the Iraqi Dinar (IQD) versus the USD, the spread between the official exchange rate and the parallel market exchange rate (delta in the chart below), was essentially flat for the month indicating stability of the parallel exchange rate. 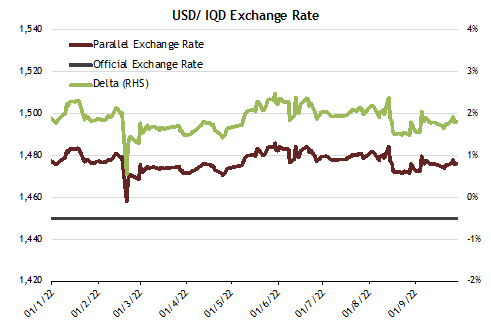 The positive market action, in both the stock and currency markets, for the second month in a row in response to similar negative political developments, is encouraging. While more data is needed for a confirmation, the positive actions imply that the markets are discounting events along the logic proposed above and discussed here over the last few months.

The year-to-date performance of Iraqi equity market, as measured by the RSISX USD Index, is now well ahead of global benchmarks, signifying the diversification benefits that it offers and its low correlation with global markets especially during this period of global market volatility and macroeconomic uncertainty. Furthermore, the market 5.0% increase year-to-date, on the back of a strong year in 2021 in which it was up 21.4%, is still 59.1% below its 2014 peak, yet shows solid signs of recovery - all of which indicates that its risk-reward profile is attractive compared with most global markets (chart below).