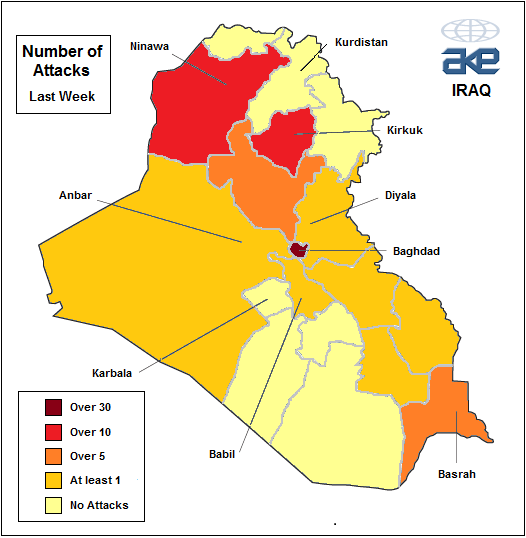 By JohnDrake on 25th May 2011 in Weekly Security Update

Levels of violence rose considerably in Iraq last week, making it the worst week so far this year. A spate of bombings in Baghdad, Mosul and Kirkuk left dozens of people dead and injured. The police and military suffered the majority of attacks, but Iraqi oil workers, US soldiers and even three European civilian contractors were amongst the casualties.

Mosul and Kirkuk saw a notable increase in attacks last week. The number of religious and ethnically motivated attacks on civilians continues to gradually rise, particularly in Kirkuk, while in both cities the police and Iraqi army remain targeted in bomb and shooting attacks on a daily basis. On 17 May a roadside bomb severely injured two employees of the state-owned North Oil Company southwest of Kirkuk, indicative that the energy sector remains at risk of specific targeting. A previously abducted Iraqi national was also found dead, indicative that kidnap for ransom remains a relevant and potentially fatal concern in the northern provinces. More positively, conditions have been very quiet in Kurdistan, with a fall in the number of demonstrations in city centres such as Sulaymaniyah over recent weeks.

There were clusters of violence around Tikrit, Fallujah and Abu Ghraib last week, but almost half of all the violent incidents recorded countrywide occurred in the capital. Conditions in Baghdad have been gradually worsening over recent months, and last week saw a spate of bombings and targeted shootings across the city. The majority of incidents were clustered in the south western Rashid area, encompassing districts such as Bayaa, Saydiyah and Ummal. Down town areas on the west bank of the river Tigris also saw a spate of incidents and even Sadr City saw a number of bombings. On 16 May a roadside bomb injured three Norwegians and two Iraqi government employees when it exploded near their vehicle in New Baghdad district. Several of the other explosive attacks involved sticky bombs, with further analysis on such attacks contained here. Many of the attacks took place on Sunday in what appeared to be a co-ordinated effort by radical Islamist groups. On the same day an attack by a suicide bomber that was likely linked to the Baghdad bombings left at least 11 Iraqi soldiers dead in the Taji area north of the capital. These attacks may be claimed as vengeance for the killing of Osama bin Laden, but in reality they fit the already existing pattern of co-ordinated attacks still carried out on a regular basis in the country. Claim or no claim, they were likely being planned prior to his death.

Southern Iraq remains much quieter than the rest of the country, but attacks continue to take place nonetheless. Last week saw a spate of mortar attacks around Basra International Airport, a not altogether new phenomenon, but a reminder of the fact that even well defended facilities are not immune from violence. The border crossing point into Iran at Shalamjah also came under mortar fire, although no-one was hurt during either of the incidents. In general the number of casualties from these types of attack remains very low, and mortar attacks are far less frequent than they were several years ago. Still, however, travellers to Iraq need to undergo suitable health and safety training. Once in the country, be prepared to take cover at short notice, familiarise yourself with emergency procedures and know where your nearest fire exits, shelters, medical kits and trained personnel are.

You can obtain a free trial of AKE’s intelligence reports here.